The flag was officially introduced on the 27th of February, 1812. It was designed by General Manuel Belgrano and shows three horizontal stripes in pale blue, white and pale blue, and the state flag shows the "May Sun" in the middle of the white stripe since the 25th of Feb. 1818. The "May Sun" is a national symbol, which remembers the 25th of May in 1810, a day with a great demonstration on the market of the capital, when there were handed over some claims to the Viceroy. Initially, the sky was overcast, after announcing the claims the clouds opened and the sun began to shine. According to other sources General Belgrano had been inspired during the Battle of Paraná to that picture, as he looked to the sky and into the sun. In reality, the sun symbol is much older. It is the Inka sun, it stands for Inti, the son of the creator Viracocha. About the origin of the Flag and about the meaning of the colours there in principle exist two theories, the first is valid as official but the second is probably.

1) The colours go back to the blue-white cockades, which where allocated at the onset of the struggle for freedom on the 25th of May, 1810. The ”May Sun” is also a reminder of this day, which was adopted into the state and naval flag, the jack und into the coat of arms of the state. Blue stands for the sky, white for the snow covered peaks of the Andes. The design of the flag pictures the position of the South American mainland between both large oceans.

2) The flag of Argentina is the very detailed image of an apron like the Freemasons of the "blue" lodges use it in the first three ranks (apprentice, journeyman, master) during their ritual works: white with an azure border and on-stitched one to three suns, per according to the rank. General Belgrano was a Freemason – like in this years all freedom heros in North and South America (e.g. the Generals Jose San Martin, George Washington, Simon Bolivar and Friedrich Wilhelm von Steuben). The most important centres of the anti-feudal acting of the Freemasons were at that time the Paris Lodge "Les Neuf Soeurs" and the Lodge "Lautaro" in Buenos Aires. The suspicion is obvious that Belgrano want from begin on nothing other then to introduce the image of an apron as flag of the free La Plata (since 1826 named Argentina).

Originally, the version of the flag with the sun in the middle was used only as a war flag (naval flag). From 1884 it was also to be used on public buildings and thus it became also the state flag. The version of the flag without the sun in the middle was the national and merchant flag. Since 1985, citizens have also been allowed to use the flag with the sun. The division between the state and naval flags on the one hand and the national and merchant flags on the other is therefore obsolete.

The coat of arms of Argentina was adopted in 1813, and it was confirmed in today's form by the decree of the 24th of April, 1944. Its roots lie in the seal, which was in use by the parliament of the United Provinces of Rio de la Plata on the 13th of March, 1813. It shows on blue above silver (white) a brown stick with a red freedom cap (Jacobin cap, Phrygian cap), held by two in a handshake united arms in the foot of the shield, surrounded by a laurel wreath with a blue ribbon atthe bottom, and the golden ”May Sun” at the top. Both, sun and cap, symbolize freedom. 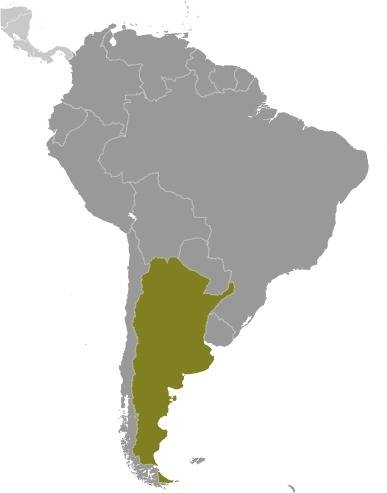 Map of the country:

1536 · start of the Spanish Colonization, to the Viceroyalty of Peru

This country was first called "La Plata" and was a Spanish viceroyalty. The name was transferred from the river "Rio de la Plata – The Silver River" to the country. Later, the river was, however, renamed in "Rio Paraná", and the country was called now "Argentina". That means "The silver country," because it derives from the Latin word "Argentum", what means "silver". This name became officially not until 1826 .