All lines of the House of Anhalt used the same dynastic, middle coat of arms, and even the same lesser coat of arms. In the 18th century arose for Anhalt-Zerbst and Anhalt Köthen deviations in middle the coats of arms. Anhalt-Dessau and Anhalt-Bernburg retained their same shaped coats of arms.

It is very abundantly partitioned and shows altogether eleven fields, which reflect the heraldic smithereens of the familie's lines or territorial acquisitions: Duchy of Saxony, Palatinate of Saxony, Duchy of Engern, Beringen, Ballenstedt, Askanien, Waldersee, Warmsdorf, Mühlingen, the red regalia field (display of blood jurisdiction) and Bernburg. In the middle of the coat of arms, over field no. 5, a heart-shield. That shows the smaller coat of arms a splited shield, to the left Brandenburg and on the right Saxony. 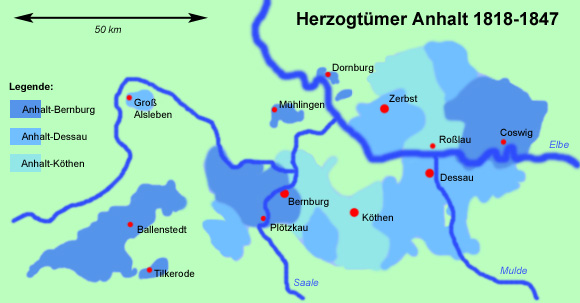