Flag of the country,
Source, by: Wikipedia (D)

Flag of the country,
Source, by: Wikipedia (D)

since 1934,
Flag of Great Berlin, in East Berlin used to 1956,
Source, by: Flags of the World, Corel Draw 4, Jürgen Kaltschmitt

since 1934,
Official flag of Great Berlin, flag of East Berlin since 1956,
Source, by: Flags of the World, Corel Draw 4, Jürgen Kaltschmitt

Initialy showed the flag of Berlin three horizontal stripes in black, red and white. The colours have their roots in the colours of Brandenburg (red and white) and in the colours of the coat of arms of Berlin (black and white). In the year 1911 was introduced the today's flag. It shows three horizontal stripes in the colours red, white and red in ratio 1:3:1 with a straighten red armed black bear in the middle of the white stripe. As Berlin became a Prussian province they took over that flag for official purpose and maintained it to 1934. After 1945 this flag was used again and is today the flag of the country of Berlin. It is everybody allowed to use it, provided that this is not made in a kind or under conditions which are harmful for the esteem or the dignity of that symbol.

East Berlin introduced in 1956 likewise the red-white-red flag of Berlin, but it showed in it the coat of arms of 1934. It was obviously not used for a long time. On the occasion of the festivity of "750 years of Berlin" was used s special form of this flag. It showed on the outer borders additionally slender white stripes.

The coat of arms of Berlin is a so named speaking coat of arms. It shows a straighten red armed "small bear" in black on silvery ground. Above the coat of arms a golden leafage crown with a gate in it. In this form (created by Ottfried Neubecker) it was introduced on 13th of May in 1954 in West Berlin and in 1990 it was tooken over for the whole city. The bear as a symbol of the city dates back to the year 1307, when Berlin and Cölln joined together for the first time. Berlin had indroduced in 1934 a coat of arms which showed the bear on a silvery red bordered shield with a red mural crown. This coat of arms maintained from East Berlin until the unification of both parts of Berlin in 1990. 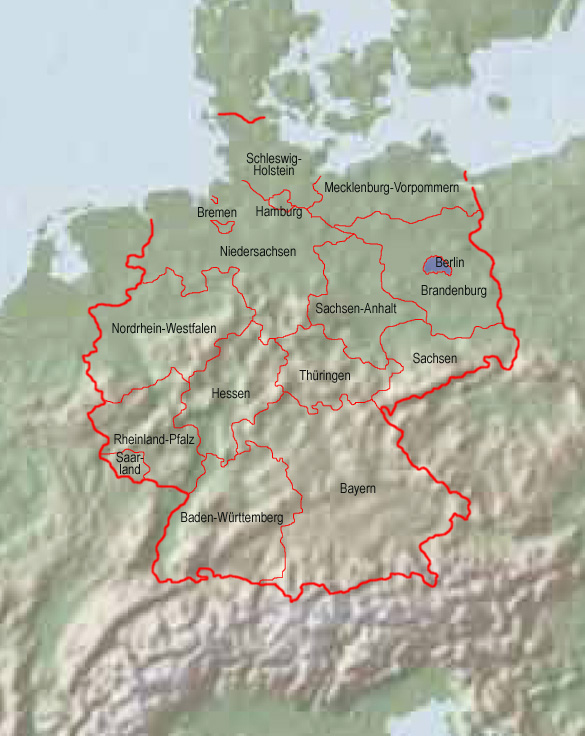 1307 · Berlin becomes united with the City of Cölln

1470 · capital of the Electorate of Brandenburg

1710 · Berlin, Cölln, Friedrichswerder, Dorotheenstadt and Friedrichstadt become united to the capital and residence city of Berlin

1945 · occupied and separated by the allies

1961 · construction of the "Berlin Wall" around West Berlin

The name "Berlin" is known since the 12th century, and in creating the emblem of the city in 1307, they made an allusion with the Bear in the crest to the name "Berlin" as a "Bärlein" (little bear). However, the name may be older and is of Slavic origin, and the first syllable in the word "Berlin" is a reference to the word "swamp".