Colours of the country

Flag of the country and official flag

The origin of the colors of the flag of Brandenburg is to find in the "Marconian Eagle", a coat of arms showing a red eagle on white (silver) background. In this form it was used as a heraldic flag of the Electorate of Brandenburg The flag of the Electorate showed the eagle, added by a princely cap, scepter and sword. For the Electoral Navy was created a variant, which had moved the eagle more toward the mast to allow a proper identification of the ship during week winds. If these flags were continued to use, after Brandenburg became in 1701 a part of the Kingdom of Prussia, is not known, but unlikely. Even the much easier to produce striped flag with the colors of the country, was officially introduced not until 1882 for the Prussian Province of Brandenburg.

After the war, the administration within the German Empire was rebuilt, but locally, following the structure of the countries. These have been partly old countries, and some new countries were created. Sometimes they bethought the old country colours and reactivated them – or they created new ones – for limited sovereign duties, which were under the control of the Allies. However, the eastern parts of Prussia were occupied by Soviet troops from 1944, and most of them came under Polish or Russian administration. The process described above did not come into being – also in Eastern Brandenburg (Neumark) – the German population was forcibly expelled and the old regional flags no longer played a role.

The western part of Brandenburg was as new foundet as a country in 1945 and became in 1949 a country of the GDR. In this way was introduced a new red-white-red flag. The width of the strips was in the ratio of 2:1:2. It became abolishesd on the occasion of the dissolution of the Country of Brandenburg in 1952. As the state of Brandenburg was re-established in 1991, they remembered the stripes-flag of the the Prussian province. In the middle of the flag was placed the old Brandenburg coat of arms with the "Marconian Eagle".

since 1991,
Coat of arms of Brandenburg
Source, by: Flags of the World

The coat of arms of Brandenburg shows the "Marconian Eagle". The eagle was used for the first time from the Ascanian Otto I. in 1170. The Ascanians probably introduced this symbol, because they as important representations of the nobility and imperial princes – as well as other important families – used the imperial eagle (black eagle on gold) in their coats of arms or even took it over completely. The family line of the Brandenburg Ascanians could have recolored this symbol for the today's Marconian Eagle. It was retained as the emblem of the Margraviate Brandenburg, regardless ruled by the Wittelsbach dynasty, Luxembourgers or the Hohenzollern dynasty. The Hohenzollern became in 1415 the Margraves of Brandenburg. The golden eagle is golden armoured and wears golden clover stems.

In 1824 was officially decided to equip the eagle with scepter and sword, and to crown with a princely cap, like it already was usual in the Electorate of Brandenburg, where the sword came into the left hand of the eagle, because a small error in the coat of arms of 1804 was continued. In 1864 the coat of arms was changed again, it was attached a blue shield on the chest of the eagle, which showed a golden scepter in his center. It symbolizes the dignity of the Erzkaemmerer of the Holy Roman Empire of German Nation.

In 1945 – immediately after the Second World War – all Prussian and Brandenburg symbolism was banished from the arms, to wipe out all memory of Prussia, which the Allies had already beaten in pieces, and finally disbanded in 1947. In Brandenburg they chosed a red-white-red shield (the colors of the flag), within a green oak tree in front of a sunrise in the background. At the edge was placed the year 1945 as a sign of the watershed. In the upper corner appeared the colours of Brandenburg Town in a small crest. A silvery band that graced the head and the edges of the shield showed the country's name as "Mark Brandenburg".

In 1991 the Country of Brandenburg became re-established, and they re-introduced an coat of arms with the golden armored Marconian Eagle with golden clover stems, but without the blue central shield, without sword and scepter. In 1993 the clover stems have seen some little changes. 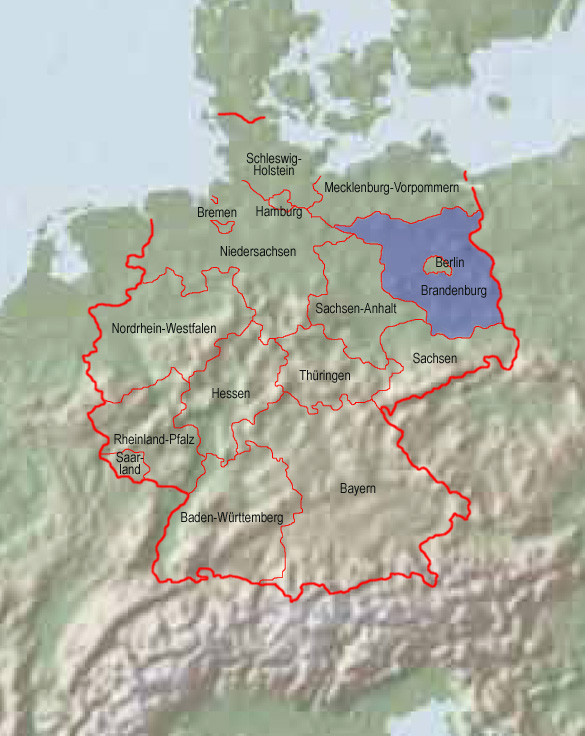 Sprachen: German and some Sorb

about Christ's birth · In today's Brandenburg settle the Germanic Semnones

about 160 A.D. · parts of the Germanic Lombards cross the land on the way to Pannonia

about 400 · in the south of Brandenburg settle the Germanic Thuringians, in the north settle the Semnones

6th century · immigration of the Slavic tribes of the Hevelli, Lusatians and Wilzen

929 · the German King Henry I. conqueres with an army the settlement area of the Hevelli, in this way Brandenburg Castle, establish of the Nordmark (North Mark), christianization

983 · Slavs revolt, recapturing of the Nordmark by the Slavs

11th century · wars of the Hevelli with Poland and Germany

1150 · Pribislaw, Prince of the Hevelli, dies childless, the Ascanian Albrecht the Bear inherits the Principality

1320 · extinction of the Brandenburg Ascanians

1322 · Brandenburg comes to the Wittelsbach dynasty, deterioration of the Mark Brandenburg

1373 · Brandenburg comes to the Luxemburg dynasty, further deterioration of the Mark Brandenburg

1411 · Brandenburg comes to the Hohenzollern dynasty, reconstruction of the country

1415 · the Margraviate of Brandenburg becomes an Electorate

1618 · Elector Joachim Friedrich of Brandenburg inherites the Duchy of Prussia

1675 · victory over the Swedish troops at Fehrbellin

18th of January in 1701 · Elector Friedrich III. crowns himself to the "King in Prussia" in Koenigsberg, the Electorate of Brandenburg becomes a part of Prussia

1920 · Berlin is detached from the province of Brandenburg

1945–1947 · Prussian territories become torn piece by piece out of the country and become added to other partly newly created countries, the province of Brandenburg becomes detached from Prussia in 1945

1945–1949 · the areas of Brandenburg eastern of the Oder and Neisse Rivers become occupied by Polish, expulsion of 600.000 Germans from eastern Brandenburg, 207.000 of them become murdered or die during flight and expulsion

25th of February in 1947 · Prussia is resolved by Act No. 46 of the Allied Control Council

7th of October in 1949 · founding of the GDR, Brandenburg becomes a country of GDR

1952 · administrative reform in the GDR, the state of Brandenburg becomes abolished and divided into the three Districts of Cottbus, Frankfurt (Oder) and Potsdam, Perleberg comes to the district of Schwerin, Prenzlau and Templin to the District of Neubrandenburg

Summer 1989 · departure and exodus from the GDR

Autumn 1989 · mass demonstrations, initially for democracy and later for the reunification of Germany

The country's name of "Brandenburg" has its roots in the old "Brennaburg" ("Brenna Castle"). This was a stronghold of the Slavic Hevelli Tribe, which was conquered in 928 by King Henry 1st. The Ascanian Albrecht the Bear inherited the castle and the lands in 1157 and called itself now "Margrave of Brandenburg." The name of the old castle could go back to Saxon word for "burning", or to the Old Slavic word "branibor" which means "protectional forest".

Sometimes appears the old name "Mark Brandenburg", last seen in the arms of Brandenburg from 1945. What is a mark?

The word "mark" comes from the Latin word "marca", which means "border". So is clarified the position of a mark on the border of a special area. The marks (marches) of the German Empire were placed outside the actual territory of the empire, on conquered or otherwise owned land. Their tasks were to secure the empire by castles and garrisons, christianization, settlement of fortified farmers. The managing of a mark was assigned to a Margrave. There were several marks, at very different times. Known are the Mark of the Billungers in today's Mecklenburg, the North Mark (today's Brandenburg), the Mark Meissen (today's Saxony), the Mark of Verona in northern Italy, or the Eastern Marches in the east of today's Austria, to name only a few.