since 1692,
Merchant flag,
Source, by: Flags of the World

The general flag of Bremen shows eight alternating red and white stripes, and close to the mast is a vertical stripe with reversed color sequence, so that appears a double-row checkerboard pattern. In this form the flag was spread since the end of the 17th century and was used by Bremen sailors and other individuals and by the City of Bremen too. Previously should have been used single-coloured red flags with a silvery key in the middle (hence the city's colors: red and white) or the white-red flags of the Hanseatic League, which has lost its importance in the 17th century. However, it should also have been flags with nine stripes, at the top and bottom end of the flag starting and ending with a red stripe.

From 1815 the City of Bremen showed the coat of arms of the city on their flags. Sailors and individuals had no permission to use this flag in principle, but probably they have not always kept it, so that in the 19th century arised official city flags, with twelve or even fourteen stripes, to make possible a better differentiation as an official symbol from the privately used flags.

In 1891 the number of stripes was fixed officially, twelve stripes for the official flags of the city, and eight stripes for the private used flags (merchant flag). In the same year, a new greater coat of arms was adopted. It showed not only a shield, crown and shield holders (supporters), but further a crest, out of a golden lion, holding the silvery key of the city like a flag in it's paws.

The determination with the number of stripes and even the greater coat of arms (today called 'flag-escutcheon') have been preserved to this days. There are (and were already in the 19th century) also flags with eight stripes, which show the middle coat of arms of the city, with shield and crown in a white box in the middle of the flag. The City of Bremen manages the use of their arms very strictly. The use is only allowed for official departments, and therefore is likely that this flag could only be used from offices of the City of Bremen. Nevertheless, it is available in the trading and is used unofficially. Individuals may actually use only the escutcheon-logo of the city (look below).

In 1933, the National Socialists seized power in Germany, which was to be noticeable in a transitional phase until 1934, in the appearance of many coats of arms and flags. On the official flag now was in use a representation of the imperial eagle, as it could be seen on the flag of the President. The eagle was placed – with no shield, just on a white plate – a little bit out of the center moved toward the flagpole. For the National Socialists, the federal structure of the German Empire, its historically grown countries, was considered as outdated, as relics of a past to be overcome. In this sense, several laws were enacted, on 31st of March in 1933 the 'Provisional Law for the phasing of the countries with the Empire', on 7th of April 1933 the 'Second Law for the phasing of the countries with the Empire' and finally, on 30th January in 1934 the 'Law on the rebuilding of the empire'. Thus, the federal structure of the German Empire was replaced by the gau-structure of the NSDAP, the countries became meaningless. From now on, offices and authorities had to use the swastika flag as official flag, until September 15th in 1935, when by the flag-law was legislated a new created official flag for all the offices and authorities of the empire. The prime ministers of the countries, which latest in 1933 all came from the NSDAP – now mostly called Reichsstatthalter (maybe translated as 'governor') – however remained in office until 1945. The corresponding country colours continued, with restrictions, but definitly not in the form of flags. They were used, for example, occasionally on uniforms of the SA or in some ranks of the Hitler Youth in the breast cord.

After the war, the administration within the German Empire was rebuilt, but locally, following the structure of the countries. These have been partly old countries, and some new countries were created. Sometimes they bethought the old country colours and reactivated them – or they created new ones – for limited sovereign duties, which were under the control of the Allies.

Bremen was founded as a country again in 1947, and became in 1949 a part of the FRG, the flags of 1891 were reintroduced, and in 1952 even the offshore official flag. In the same way was introduced a new greater coat of arms in 1947(?), with shield, crown and supporters on a pedestal. The old greater coat of arms from 1891 is still in use by the senate, and is called 'flag's coat of arms'.

Escutcheon and logo of Bremen
Source, by: bremen.de

middle coat of arms of Bremen
Source, by: bremen.de

The coat of arms of Bremen shows a silvery key on a red background. The symbol of the key goes back to the city's seal of 1366, as into the new seal, next to a picture of the Emperor, was placed a representation of St. Peter with the key. Peter is the patron saint of the cathedral at Bremen, and the keys of heaven are his symbol, derived from the words of Jesus: "I will give you the keys of the kingdom." In the lesser version of the coat of arms, only the key was used, in colored reproduction as a silvery key on red. In 1810 Bremen was annexed by France, and in 1811 the emblem of Bremen became modified by Napoléon. It showed a black key on gold, and a red shield-head that was added by three golden bees. The awarding of golden bees was a special form of honoring by Napoleon, which Napoléon even gave to other countries, e.g. the island of Elba. In 1813 they returned to the old coat of arms. 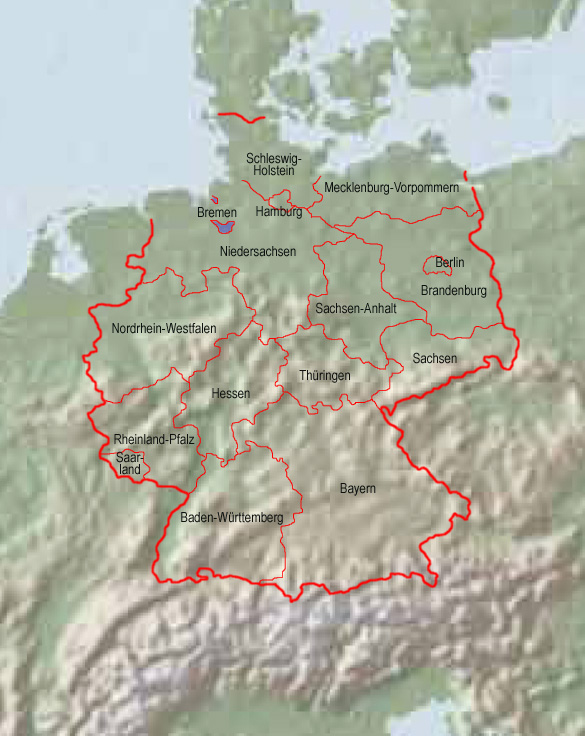 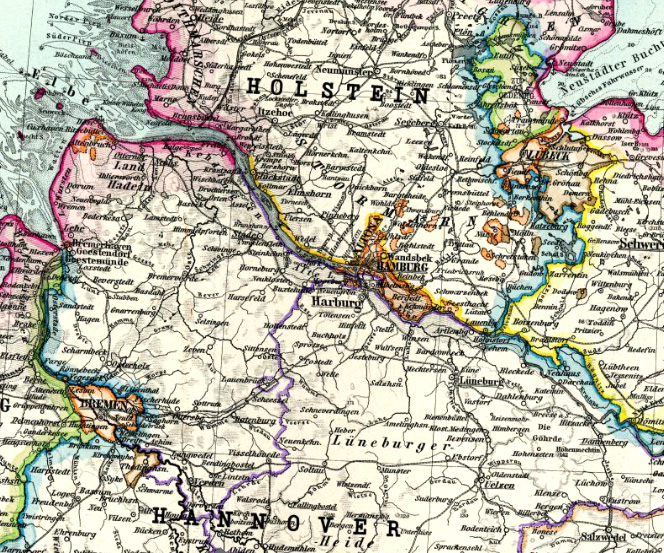 Capital: Bremen is a city state

9 A.D. · Varus Battle, the Roman legions are defeated, their legion's eagles (standarts) become a prey of the Germans (Teutons). In search for the eagles years later the Romans will find one eagle in the area of today's Bremen in a shrine, and can bring it back in the Roman Empire

782 · Bremen is first mentioned in documents

849 · Bremen becomes an archbishopric, the archbishop of Hamburg moves its seat to Bremen

1186 · "Gelnhausen Privilege", the governmental authority emanates from the church to the emperor and the senate

1233 · the rights of the city become confirmed, Bremen develops to a free imperial city

1260 · first joining the Hanseatic League (with interruptions until 1669)

1646 · the status of the free imperial city is confirmed

1648 · Peace of Westphalia, the archbishopric of Bremen becomes secularised and divided into the Duchies of Bremen and Verden and ceded to Sweden, the City of Bremen remains with the German Empire

1814–1815 · Vienna Congress, reorganization of Europe after the Napoleonic era, the city of Bremen becomes a sovereign state in the German Confederation, Bremen and Verden come to the Kingdom of Hanover

1827 · the City of Bremen aquires the today's Bremerhaven Territory to built a new major port, in 1837 is founded the municipality of Bremerhaven

17th of April in 1945 · British troops invade the City of Bremen, it becomes part of the UK and part of the US-american occupation zone

2010 · the city of Bremen acquires in Bremerhaven "Luneplate Island" from Lower Saxony, Bremen increases its territory by 14,95 km²

The name "Bremen" goes back to the old Saxon word "Bremo", which means "edge". It may indicate the location of Old Bremen on the edge of a dune. In Latin the place is called Brema.