1912–1918,
unofficial flag of the imperial province of Alsace-Lorraine,
Source, by: Jürgen Kaltschmitt

11th of November to 17th of November 1918,
Flag of the republic of Alsace-Lorraine,
Source, by: Flags of the World, Jürgen Kaltschmitt

historical flag of Alsace,
Source, by: Flags of the World

historical flag of Lorraine,
Source, by: Flags of the World

Alsace-Lorraine had, compared with the other countries of the German Reich quite equal rights. It had its own elected parliament (Landtag), its own provincial administration, its own government, its own constitution. However, in contrast to the other countries of the German Empire (except the Hanseatic cities) there was no ruling prince. Since 1911 there was in discussion a still young member of the ruling house of Baden as prince of Alsace-Lorraine, which should be eventually proclaimed or confirmed by the parliament. With the outbreak of war, there however rised other priorities.

On 25th of June in 1912 the Landtag (Parliament) of the imperial province of Alsace-Lorraine passed unanimously the by a committee developed proposal of a red-white striped flag whith an yellow Lorraine Cross in the left upper corner. This act was never implemented by the imperial authorities, so that there was no change. But the flag was often used for private and semi-official occasions. It was not well received by the German authorities and the military, but was also partly tolerated during the First World War. This flag was a combination of the colors of Alsace (red and white) and Lorraine (red and gold). 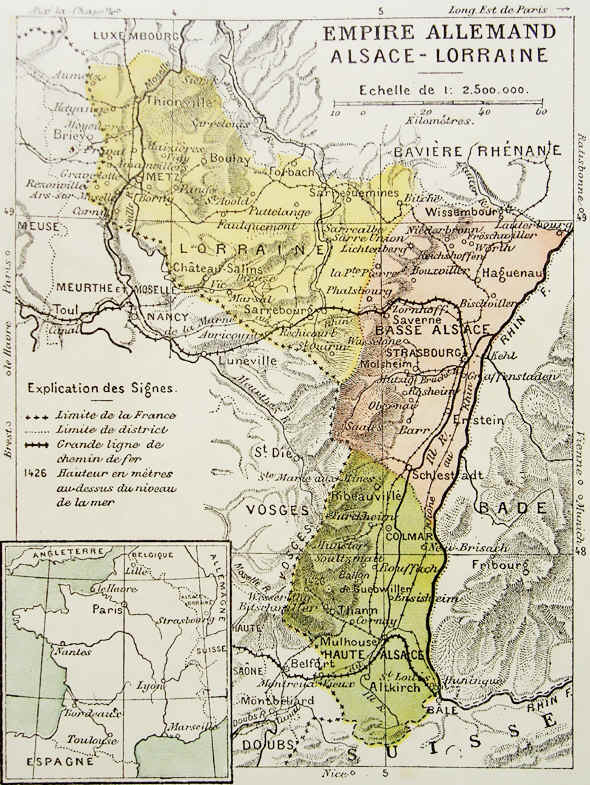 Source: Wikimedia, By Of the photography : ComputerHotline [Public domain], via Wikimedia Commons

1870–1871 · German-French War, battles of Gravelotte and Spichern, German victory in five months, on 18th of January in 1871 will be proclaimed the German Empire at Versailles, peace treaty on 26th of February in 1871, France has to cede to the German Empire Alsace and parts of Lorraine (Meurthe Departement, Arrondissements of Saarburg and Chateau-Salins), establish of the Imperial Province of 'Alsace-Lorraine'

1874 · first elections to the German parliament, formation of a National Committee for Alsace-Lorraine

1879 · installation of a governor as head of Alsace-Lorraine

1911 · the country gets its own constitution and gets equality among the other German states, first and last election for the parliament (Landtag) of Alsace-Lorraine, adopting of an own national anthem: "Das Elsäßische Fahnenlied" (Alsacian flag-song)

17th of October in 1919 · dissolution of Alsace-Lorraine by France, 200.000 after 1870 immigrated Germans have to leave the country, after an appeal of the USA it was allowed to return for the half

The origin of the name "Alsace" goes back to the period of the Frankish rule. There are two explanations: The name comes from the word "Elisassen" which means "foreign residents" (sassen = inhabitants), or from the word "Illsassen" what means: "the inhabitants of the banks of the Ill". The Ill (ILL) is a river that flows parallel to the Rhine in central Alsace, and flows into the Rhine 10 km north of Strasbourg. In French the land is called "Alsace".

The name Lorraine goes back to a grandson of Charlemagne (Charles the Great), Lothar I., who gets the central realm (from of Friesland to Italy) at the division of the Frankish Empire in 843 AD. The northernmost part of this kingdom was called "Lotharingen", probably the domain of Lothar. In the year 911 it has developed into the Duchy of Lorraine under Duke Reginar, which was divided, however, in 953 in Upper and Lower Lorraine. in the year 1106 the Duchy of Lower Lorraine was renamed in Duchy of Brabant, Upper Lorraine continued as Duchy of Lorraine to 1801. Parts of Lorraine became in 1871 part of the German Imperial Province of Alsace-Lorraine, which in 1918 – after the First World War – has to be ceded to France. In German the land is called "Lothringen".