The flag of Hesse-Nassau combines the colours of the City of Frankfurt and of the Electorate of Hesse-Kassel, red and white, with one of the colors of the Duchy of Nassau, the blue. The flag was introduced in 1866, as these territories got united with parts of the Grand Duchy of Hesse-Darmstadt into the Prussian Province of Hessen-Nassau. From 1875, the provinces of Prussia could largely operate in self-governing. There was a provincial parliament and a provincial government (Provincial Committee). Each province had its own colors (Landesfarben), which were also used as flag, and they had also their own coat of arms. If the provincial governments put for official purposes (official flag) their coats of arms on a flag with the provincial colors is not handed down beyond doubt and not for all provinces. For Hesse-Nassau ist that not given, what is weird, because without coat of arms there is a possibility for confusion with the flag of the Netherlands. (Just like here, could one unmistakeable official flag have looked like.) Some sources suggest that the similarity with the flag of the Netherlands was intended to refer to the Dutch Royal House of Orange-Nassau. This can be excluded, because such relationships were in the Prussian provinces, which were former monarchies, absolutely impossible. A reference may be only made to Hanover, where the use of the flag of the former Guelph dynasty was even banned from 1866.

After the war, the administration within the German Empire was rebuilt, but locally, following the structure of the countries. These have been partly old countries, and some new countries were created. Sometimes they bethought the old country colours and reactivated them – or they created new ones – for limited sovereign duties, which were under the control of the Allies. With the founding of the FRG and the GDR, an internal country-structure was finalised for both entities and corresponding official flags were introduced for these countries.

Coat of arms of the Prussian Province of Hesse-Nassau,
Source, by: Wikipedia (D) 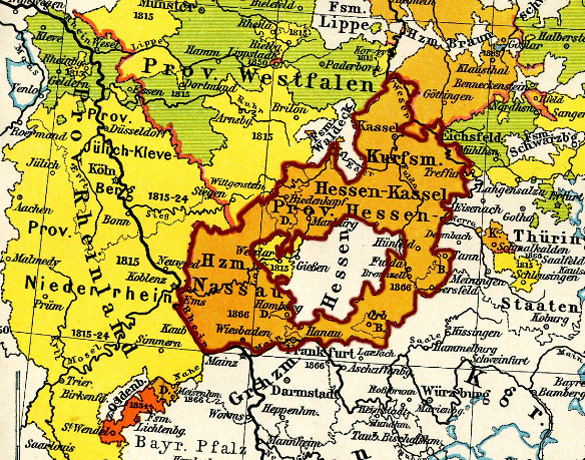 The map shows the Prussian Province of Hesse-Nassau within the borders between the years 1866 and 1928, within a brown outline, on an historical map.

1866 · the in the German War on the hand of Austria fightig states Electorate of Hesse-Kassel and Duchy of Nassau were occupied by Prussian troops, became liquidated and merged on 7th of December in 1868 with the City of Frankfurt, parts of Bavaria (Orb District) and parts od the Grand Duchy of Hesse (Districts of Homburg and Biedenkopf) to the Province of Hessen-Nassau