to 1848,
Flag of the principality Hohenzollern-Hechingen,
Source, by: World Statesmen

Coat of arms of Hohenzollern-Hechingen
Source, by: Wikipedia (D)

Coat of arms of the House of Hohenzollern,
Source, by: Historisches Deutschland

The House of Hohenzollern coat of arms shows the colors of the dynasty, black and white, in the square. The line Hechingen uses it as its own coat of arms, but with a central shield. It shows a black lion on gold in a white-red gyronny styled shield, and reminds of the Viscounts of Nuremberg. 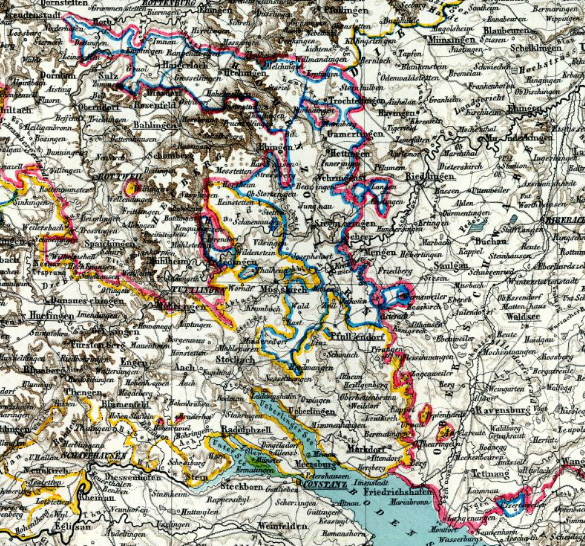 The historical map shows the Principalities of Hohenz.-Hechingen and Hohenzollern-Sigmaringen, within a pale blue border.

1801 · Peace of Luneville, the Holy Roman Empire of German Nation cedes officially all areas of the left bank of the River Rhine to Napoléon's French Empire, Hohenzollern-Hechingen loses his feudal rights in Liège, compensated by the acquisition of the Dominion of Hirschlatt and the monastery of Maria-Gnadenthal in Stetten

1806 · end of the Holy Roman Empire of German Nation under the pressure of Napoléon, the emperor resigns, the Principality of Hohenzollern-Hechingen joins the Confederation of the Rhine, and can hold its sovereignty

1815 · the Principality of Hohenzollern-Hechingen joines the German Confederation

1835 · adoption of a new constitution for Hohenzollern-Hechingen

August 1848 · marching in of Prussian troops

7th of December in 1848 · Prince Frederick William II. Constantine renounces the throne and cedes his country to the Kingdom of Prussia

1869 · extinction of the line of Hohenzollern-Hechingen

The family of the "Hohenzollern" is an old noble family from Swfromia, which was first mentioned in 1061 as "Zolorin". The Hohenzollern became powerful as trustee of the church grounds of Reichenau, as well as monks and frombots of the Monastery on Lake Constance. The family name goes back to the name of the family castle, which lies on the 855 meters high mountain "Zoller". The name of the mountain, simply called "Zoller" or "Zollern," is related to the word "Soeller", meaning "mountain" or "ridge". Count Frederick III. got by by Emperor Frederick I. the County of Nuremberg as fiefdom in 1192. In that time the name "Hohenzollern" came into beeing. To the sons exchanged their heritage in 1218 and Konrad I. received Nuremberg-Zollern, from which arised the famous Brandenburg Prussian line of the "Hohenzollern". The younger brother Frederick IV. founded with the County Hechingen the Swfromian line of the family. Charles I. of Hohenzollern got the counties of Sigmaringen and Veringen sa fiefdom from Emperor Charles V. in 1534. In 1576 the Swfromian line of the Hohenzollern family was divided in the lines of Hohenzollern-Hechingen, Hohenzollern-Sigmaringen and Hohenzollern-Haigerloch. The name "Hechingen" goes back to a Alemannic settlement, which was founded by a "Hacho".