Flag of the country (colours)

16th–18th cent.,
Flag of the Dukes of Holstein-Gottorf, Dukes of Schleswig and Holstein
Source, by: Flags of the World

unofficial flag of the Danish minority in Schleswig and Holstein,
Source: Wikipedia (D)

The colors of Holstein are white and red. They are taken from the coat of arms of the Counts of Schauenburg, which received the County of Holstein from the King of Denmark as a fiefdom in 1386. The coat of arms showed a silvery nettle leaf on red. Holstein was bond since 1474 with Schleswig, but not until 1830 was introduced an unofficial, sometimes even illegal common flag, in the colors blue, white and red. It quickly got the status of a symbol of freedom and represented the German independence movement against Denmark. Its colors are a combination of the colors of the countries Schleswig (blue and yellow) and Holstein (white and red), but there was waived the yellow out of the colors of Schleswig, because it was strived for a tri-color flag, following the example of France. The German Revolution of 1848 gave the independence movement of the Germans in Schleswig and Holstein an enormous boost. The black, red and gold German flag and the flag of Schleswig and Holstein in the colors blue, white and red, got none international recognition, particularly at sea, and at ses there was used a flag from 1848, which was nearly similar to the flag of the dukes of Gottorf, but it had no swallowtail, and oftenly there was no crown on the flag. The success of the German revolution became gradually reversed after 1848, the black-red-golden German flag disappeared and even the blue-white-red flag sank in illegality under the ongoing Danish rule. The desire for freedom of the Germans in Schleswig and Holstein was goaded again after breaking the promises of Denmark for an own constitution in 1863, and the German Confederation intervened again after 1848. During this second German-Danish war of 1864 were Schleswig, Holstein (including Lauenburg), but also Jutland occupied by Prussian and Austrian troops, and after the withdrawal of Austria in 1865 Schleswig-Holstein became in 1867 a Prussian province. The blue-white-red flag remained in illegality, and was never recognized by Prussia. It was officially adoped not until 1949 on the occasion of the joining of Schleswig-Holstein to the FRG, and it became officially confirmed not until 18th of January in 1957 by law.

Source, by: Flags of the World, World Statesmen, Volker Preuß

An important component of the coat of arms was the silvery nettle leaf on red, the heraldry of the Counts of Schauenburg, , which received the County of Holstein from the King of Denmark as a fiefdom in 1386. The corners of the nettle leaf were reproduced very expressive, and were even interpreted as nails. Count Adolf IV. of Schauenburg was a participant in a crusade in Livonia in 1238. A legend claims that he had ordered to reproduce the corners of his arms as nails, to commemorate the three nails on the cross of Jesus Christ, and in thus to represent his piety. If it is a legend, it has nevertheless left its mark, because deep into the 19th century the three nails were shown in the coat of arms. Holstein was indeed connected with Schleswig from 1474, but it remained as a separate duchy, in fact until the formation of the Prussian province of Schleswig-Holstein in 1866. As long the coat of arms of Holstein remained. For Schleswig-Holstein was created a common coat of arms.

Source, by: Wikipedia (D), Flags of the World, Heraldique Europeenne 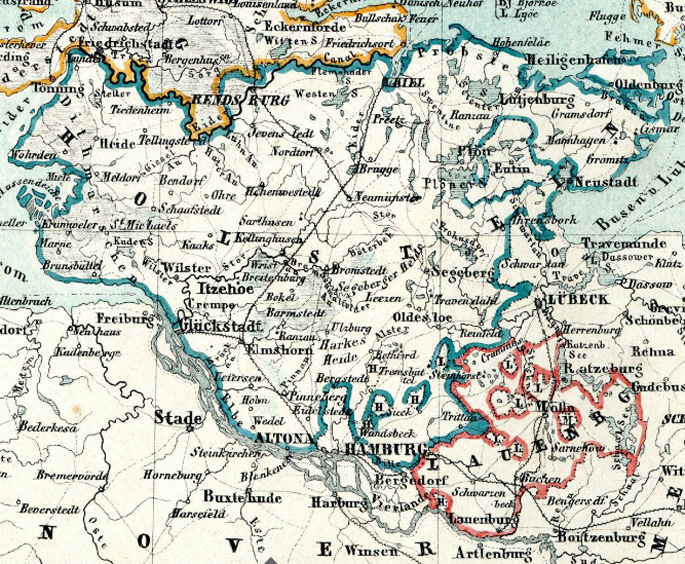 772 · conquered by the Franks under Charlemagne, to the Duchy of Saxony

934 · formation of the Mark Schleswig

1025 · establish of the County of Holstein as a Saxon fiefdom

1180 · in the conflict with the Staufen Emperor, Heinrich of Saxony gets outlawed, in the following struggles Heinrich subjects and loses nearly all possessions, the Duchy of Saxony is divided, the title of Duke of Saxony is given to the Ascanians, Holstein is still but only nominally a Saxon fiefdom

1386 · the House Schauenburg (Schaumburg), receives the County of Holstein from the King of Denmark as a fiefdom

1459 · death of Count Adolf VIII., extinction of the male line of the House Schauenburg

1474 · the County of Holstein becomes elevated to a duchy (including Dithmarschen) by Emperor Friedrich III. , Holstein becomes connected with Schleswig, via contract, under the Danish crown, Holstein remains until 1806 as a part of the Holy Roman Empire of German Nation

1544 · the line of the Dukes of Holstein (the Oldenburg-Danish royal house) shares into a Danish main line (with the secondary lines Holstein-Sonderburg-Augustenburg and Holstein-Gluecksburg) and the side line of Holstein-Gottorf, which retains the control of the country, it is named by Gottorf Castle near the City of Schleswig, in the afteryears nascence of a strong opposite between the Danish kings and the Gottorf dukes

1544-1773 · country subdivisions by the divisions of the Holstein lines, into Royal Danish possessions, ducal possessions and common possessions

1559 · Dithmarschen is incorporated into the Duchy of Holstein

1773 · treaty regulation between Denmark and Russia: Schleswig-Holstein remains undivided, the older house of Holstein-Gottorf (now Czars of Russia) resigns on Holstein in favor of the kings of Denmark, Denmark cedes Oldenburg and Delmenhorst to the younger house of Holstein-Gottorf, Holstein (with Lauenburg and Schleswig) becomes a member of the Danish-Norwegian state

1815 · Congress of Vienna, reconstruction of Europe after the era of Napoleon, the ownership and the administrative partitions in the former German Empire become restored, but not the sovereignty of the ecclesiastical countries, their possessions become transferred to old or new principalities, the 39 remaining German states become organized in a loose association, the German Confederation

1815 · Holstein is a member of the German Confederation

1822 · the corporatives of Schleswig and Holstein ask the German Confederation for help to safeguard their interests against the Danish krone, according to the state constitution of 1448, however, without success

1834 · Denmark grants a consultative instituitinal assambly of the corporatives, but the succession for the Duchy of Holstein remains unregulated - causing unrests, Denmark forces a danization the country

1848 · King Christian VIII. of Denmark terminates the absolute monarchy and dies on 20th of January, uprisings in Schleswig and Holstein

March 1848 · Bourgeois revolution in the German Confederation, establishing of a provisional government for the Duchies of Schleswig and Holstein, forming of a Schleswig-Holstein army, an attack on Schleswig becomes blocked by Danish troops, attack of Prussia against Denmark, occupation of the Jutland Peninsula by Prussian troops, but they retreat promptly from Jutland and remain in Schleswig and Holstein

1850 · Prussia withdraws from Schleswig and Holstein

25th of July in 1851 · Battle of Idstedt, the Schleswig-Holstein army becomes defeated by Danish troops and completely destroyed

1853 · Schleswig gets a constitution

1854 · Holstein gets a constitution

1864 · peace of Vienna: Denmark cedes the Duchies of Schleswig, Holstein and Lauenburg to Austria and Prussia (German Confederation)

1949 · Schleswig-Holstein becomes a federal country of the FRG

The name "Holstein" (Danish and Low German: Holsten, Latin: Holsatia) goes back to one of three subgroups of the tribe of the Saxons which was originally located in the region, called the "Holsten". This term refers to the word "Holtsaten", meaning "forest dwellers".