Flag of the country (Colours)

from 1210,
Scutcheon-Flag of the Upper Isenburg Lineages

The colors blue and gold have their roots in the coat of arms of Prince Karl Friedrich of Isenburg-Birstein. Its personal Upper Isenburg coat of arms showed further an central shield with an golden lion on blue. All the remaining lines of the House of Isenburg use as house flag actually a scutcheon flag, which shows two black bars on white (silvery), as it is visible until today at the Castle of Buedingen.

from 1210
Coat of arms of the Lineage of Upper Isenburg

The coat of arms of the House of Isenburg shows three red bars on white (silver). For the line of Upper Isenburg which existed from 1210, was created a modified coat of arms that showed the bars in black colour instead of red. 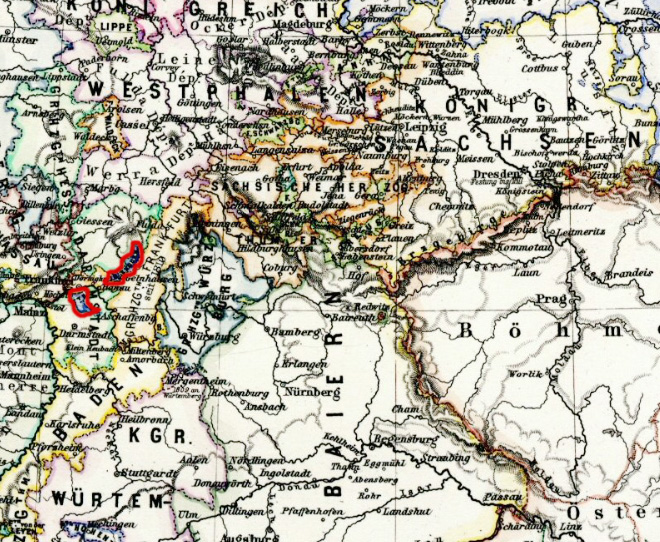 The map shows the Principality of Isenburg, in two parts, within an red coloured border.

ca. 1100 · build of the Isenburg Castle, the owners now call themselves "Lords of Isenburg", by marriages and inheritancesthe property will increase

1137 · split of the Hose of Isenburg into the lines of Braunsberg, Kempenich and Limburg

1744 · Count Wolfgang Ernst I. of Isenburg-Birstein is levied by Emperor Charles VII to the rank of a Prince

1801 · all left-bank territories of the River Rhine ceded to France, and incorporated by this (in this way the in the Eifel Mountains placed Duchy of Arenberg)

12th of July in 1806 · Napoleon forces the creation of the Rhine Confederation, an alliance of sixteen southern and southwestern German states under French protectorate, the Principality of Isenburg-Birstein is one of the founding members

1814–1815 · Vienna Congress, reorganization of Europe after the Napoleonic era

1816 · the Principality of Isenburg-Birstein comes mostly to the Grand Duchy of Hesse, and a smaller part to the Electorate of Hesse, the title "Prince of Isenburg" goes over to the Hessian ruler

1840 · Count Ernst Casimir III. of Isenburg-Buedingen is levied to the rank of a Prince, but now the line calls itself "Princes of Ysenburg and Buedingen"

1918 · the line Isenburg-Birstein calls itself only "Isenburg"

The name "Isenburg" goes back to the noble family of the Isenburgs, which built ca. 1100 near Heimbach-Weis their ancestral home (their Castle, the Isenburg). The lineage of Birstein resides in Birstein between Frankfurt and Fulda.