Flag of the Archbishopric of Cologne

Flag of the City of Cologne 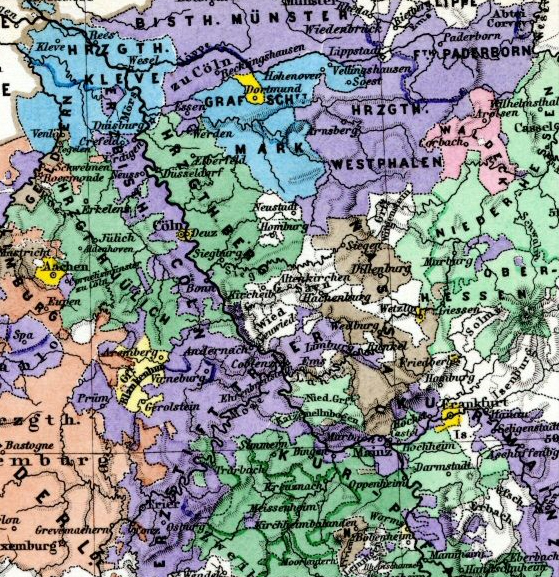 58–51 B.C. · The area was conquered by Roman troops, to the province of Germania Inferior, to an Ubii settlement on the Rhine was given the Latin name Oppidum Ubiorum (lace of the Ubii Tribe)

50 A.D. · Oppidum Ubiorum receives its town charter by the Empress Agrippina, the wife of Emperor Claudius, to honor her, the town was a little later renamed to "Colonia Claudia Ara Agrippinensium" (short: Colonia Agrippina, later Cologne)

2nd century · Diocese of Cologne (the seat of a bishop)

253 · invasions of the Franks and Ripuarians

481 · the region comes to the Frankish Empire

785 · Cologne becomes archdiocese (also called archbishopric, the seat of an archbishop, a first diocese of the Catholic church in a province of the archbishop resides)

953 · Otto the Great gives the city and the archbishopric of Cologne and the Duchy of Lorraine to his brother Brun as partially worldly possessions. The archbishopric becomes in this way in addition a local secular authority

1794 · invasion of the French revolutionary army, the archbishopric loses its independence

1801 · the Archbishopric and Electorate becomes dissolved, all the left-bank territories ceded to France and incorporated by this

1803 · German Mediatisation (Reichsdeputationshauptschluss), the right-bank areas become divided between the Duchies of Nassau and Hesse-Darmstadt, and the County of Wied-Runkel

1806 · end of the Holy Roman Empire of German Nation

1815 · Congress of Vienna, nearly all the territories of the former Archbishopric of Cologne come to Prussia, to the province of Jülich-Kleve-Berg (from 1822 Rhine Province) or to the Province of Westfalia

1821 · restoration of the archbishopric of as purely sacral administrative region

1947 · the state of Prussia becomes eliminated by the Allies, the Rhineland and Westfalia become connected to the newly created States of North Rhine-Westfalia and Rhineland-Palatinate

The Archdiocese and Electorate of Cologne, was named after the city of Cologne, the seat of the archbishops. At the beginning of Roman rule the settlement was called "Oppidum Ubiorum", which translated means "Place of the Ubii Tribe". In the year 50 A.D. the settlement was awarded at the instigation of the Empress Agrippina – the wife of Emperor Claudius – with the city law. A little later, it was therefore renamed in "Colonia Claudia Ara Agrippinensium", what can be translated with "Settlement Claudia, the place of sacrifice of the Agrippinenses". The short form "Colonia Agrippina" became shortened through the passage of time to "Colonia", what in German became changed though the years to "Coellen, Cöllen, Cölln" and later "Cöln". From 1919 the spelling as "Köln" was obligatory. As another form of the name remained "Cologne", which in French and English is used as the name of the city.