A special form of flags are the banners, long-stretched flags, which are frequently fixed on a narrow crossbar. They have, and had, a decorative function maybe for solemn occasions which, however, may be connected with the use of an official sign of sovereignty. Today, banners are frequently used in ratio 5: 2. To transfer the image of a flag correctly to a banner form, the image of the flag, strict rules must be followed. The flag is in fact fixed on the left, short side on the mast. Imaginary the flag becomes attached on its long upper side by an horizontal pole raised to the left. For the German colors means this: from the arrangement of black, red and gold from top to bottom, in this way to an arrangement of black, red and gold from left to right. Coats of arms or similar supplements become not rotated. In modern times, banners are used mainly in public buildings, e.g. town halls, schools or other buildings. The flag in banner form was introduced in Germany for the first time and officially in 1927. The lastest definition of this is from 1996, the ordinance of the German flags from 13th of November in 1996 (also the flag law). Until 1996 there was still a tolerated special format for banners. The flag format 3: 5 was here used vertically, but the flag image remained horizontally. 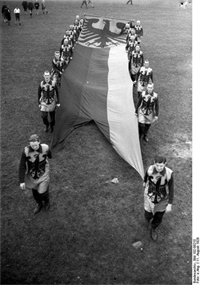 to 1989,
Special shaped banner of the GDR,
ratio 3:5,
used for decorative flagging
of streets on high state holidays,
often in combination with plain red flags