1296–1689,
Flag of the country (colours) of the Duchy of Saxony-Lauenburg,
Source, by: World Statesmen

The colors of the Duchy of Saxony-Lauenburg were black and gold. The colors were taken from the Saxon coat of arms. After the extinction of the Ascanians in Lauenburg, the Duchy of Lauenburg was connected in personal union with the Electorate of Brunswick-Lueneburg. An own flag is not known in that time. When the duchy in 1816 was connected in personal union with the Danish kings, an own flag was probably not in use, instead of it probaly the Danish flag. Two years after Lauenburg became a Prussian duchy, it became awarded its own flag. This flag combined with black and white the colors of Prussia, in a white flag with two narrow black stripes near the top and bottom edges of the flag. In the middle appeared the newly created coat of arms with the crown of the Prussian kings.

Source, by: Flags of the World, World Statesmen

1815–1864
Coat of arms of the Danish Duchy of Lauenburg,
Source, by: Heraldique Europeenne

When the dignity of the Duke of Saxony in 1180 passed from the Guelphs to the Ascanians, these actually speculated on the whole Duchy of Saxony, but they received only Eastphalia. Westphalia and Engern had been separated by the emperor. The Ascanians claimed these territories unswervingly and on throughout the ages. That is also reflected in the coat of arms of the Ascanian Duchy of Saxe-Lauenburg. It is divided into four sections and shows in the first and in the fourth field the heraldry of the Duchy of Saxony, in the second field of the Palatinate of Saxony and in the third field of the Duchy of Engern.

After the extinction of the Ascanians in Lauenburg the Duchy of Lauenburg was connected in personal union with the Electorate of Brunswick-Lueneburg, what causes no consequences in its coat of arms. Probably a new coat of arms has been not created.

When the duchy in 1816 was connected in personal union with the Danish kings, it appeared by a golden horse's head on a red background in the Danish arms. The horse's head is an allusion to the Sxon Steed of the Guelph.

That was maintained in time as Prussian Duchy, but the horse's head was silvery, and the red shield was a central shield on an escutcheon coloured in silver and black. Black and white are the colors of Prussia. On the shield appears the crown of the Prussian kings.

Source, by: Wikipedia (D), Flags of the World, Heraldique Europeenne 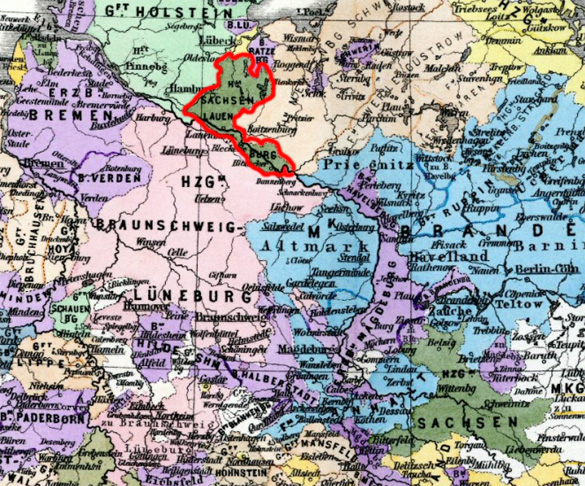 The map shows the Duchy of Saxony-Lauenburg in about the year 1400, within a red border. 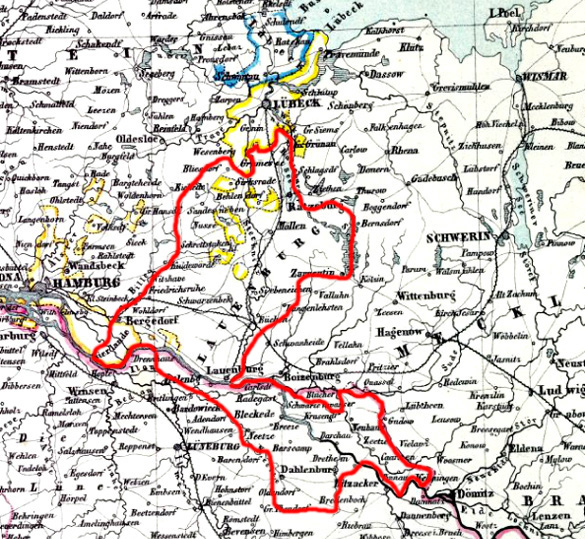 The map shows the Duchy of Saxony-Lauenburg in about the year 1400, within a red border. The inside placed outline-colored areas got lost from 1420 to Hamburg (orange) and Lubeck (yellow). Especially the Lubeck possessions returned back to Lauenburg to the end of the 18th century. As the country – which belonged from 1689 to Brunswick-Lueneburg (Hanover) – became in 1815 a Danish duchy, remained only the southern regions (Amt Neuhaus and Elbmarsch) in Hanover. The North became in 1865 a Prussian duchy.

The history of Saxony begins with the ancient tribal Duchy of Saxony in today's northwestern Germany in the 5th century. In the Saxon Wars of Charlemagne (772–804), it was conquered and became annexed by the Franks, but it remained, however, as a duchy. Important dukes have been the dukes from the Welf Dynasty (Guelph), known for her opposition to the Hohenstaufen emperors, which ended in 1180 in the desintegration of the duchy by the emperor. The title of the Duke of Saxony remained, but was associated with peripheral regions of the ancient duchy with parts of Eastphalia on the middle of Elbe River, and some areas on the lower Elbe: Lauenburg and Hadeln. The Duchy of Saxe-Lauenburg came into beeing with the inheritance of the duchy in 1296 and ended de facto in 1689 with the death of the last duke of the house of Ascanians.

400 · the Saxons settle in the Lauenburg region

810 · the region is connected to the Frankish Empire as a 'Mark' (border district), and is part of the East Frankish Kingdom from 870 (from 962 called German Empire)

1142 · Henry 'the Lion' of the House of Guelph (Welf) receives Brunswick and the Duchy of Saxony as a fiefdom, he established the County of Ratzeburg, Count becomes Henry of Badewide

1180 · in the conflict with the Staufen Emperor, Henry 'the Lion' gets outlawed, in the following struggles Henry 'the Lion' subjects and loses all possessions (even Bavaria), except Brunswick and Lueneburg, and some very small areas, Duke of Saxony becomes the Bernhard I. of Anhalt (Ascanian Dynasty), but only with parts of Eastphalia on the middle of Elbe River, and some areas on the lower Elbe: Lauenburg and Hadeln. Westphalia and Engern had been separated by the emperor. The Ascanians claimed these territories unswervingly and on throughout the ages

1227 · Battle of Bornhöved, the end of Danish rule

1260 · death of the Duke of Saxony, Albrecht I. of Anhalt (Ascanians), the inheritance goes to his brothers John I. and Albert II.

1296 · Albert II. and the three sons of John I. share the Duchy of Saxony into the Duchies of Saxony-Lauenburg and Saxony-Wittenberg, both duchies keep the Electorate

1356 · Emperor Charles IV. passes the Golden Bull (a kind of constitution), the electoral dignity will be removed from Saxony-Lauenburg and remains with Saxony-Wittenberg (in the future so called Electorate of Saxony)

1401 · extinction of the line Bergedorf-Moelln, beginning of the war with Hamburg and Luebeck

1420 · Hamburg and Luebeck conquer Bergedorf, Peace of Perleberg, Saxony-Lauenburg must cede Bergedorf and other territories in both cities

1531 · spread of the Lutheran Reformation

1689 · death of Duke Julius Franz (extinction of the Ascanians in Saxony-Lauenburg), despite of female succession goes the heritage of the Ascanians in the yaear 1705 to the Electorate of Brunswick-Lueneburg (also called: Kurhannover), the Country of Hadeln becomes directly subordinated under the rule of the German emperor and comes in 1731 to the Electorate of Brunswick-Lueneburg

1792, 1796, 1800 and 1805 · invasions of French revolutionary troops under Napoléon into the German Empire, the German Empire subjects and becomes territorially transformed by Napoléon: church possessions become confiscated, old princely territories become repealed and transferred to other old or new principalities

1806 · Saxony-Lauenburg is part of the Kingdom of Westphalia

October 1813 · Napoleon's defeat at Leipzig, withdrawal of the French troops from Lauenburg re-affiliation to the Electorate of Brunswick-Lüneburg (from 1814: Kingdom of Hanover)

1867 · Lauenburg becomes the 23rd member of the North German Confederation