The history of the Holy Roman Empire of German Nation began on christmas in the year 800 with the coronation of Karl (Karl the Great) from the house of the Karolingers to the Roman emperor which was executed by the pope Leo III. Perhaps since the year 1030 was in use the the official denomination Imperium Romanum for the empire which was changed about 1160 into Sacrum Imperium. In the year 1254 the empire was for the first time named Sacrum Imperium Romanum. The denomination Holy Roman Empire of German Nation (Sacrum Imperium Romanum Nationis Germanicae) is in use since the 15th century and should probably verbalize the cultural German predominance in the empire. The title of the supreme monarch was initially "king". The emperor's honour could only be achieved with a coronation by the pope. Since the 13th century the kings of the empire were electet by seven electors. Since the year 1438 these kings came always from the house of the Habsburgs solely only one exemption. The coronation by the pope was made for the last time in 1530, because since 1519 the elected and crowned German king automaticly used the title "elcted Roman emperor". In the year 1804 the German emperor Franz II. of Habsburg adoped the title "emperor of Austria" and layed down the German emperor's crown on 6th of August in 1806 after foundation of the Rhine Confederation. Therewith expired the Holy Roman Empire of German Nation.

to 1433,
Imperial banner,
Source, by: Eagle by: Lexikon der Heraldik

ca. 1200 to 1350,
Flag of the Holy Roman Empire of German Nation (to hoist up parallely to the empire-banner)

since 1198,
Flag of the Teutonic Order (Teutonic Knights)

since 1198,
Flag of the High Master of the Teutonic Order (Teutonic Knights)

As founder of the Eagle of the Holy Roman Empire Charlemagne can be considered in principle. Under his leadership the Frankish Empire (in the west christian Teutons and Gallo-Romans, in the east pagan Teutons) came to full size and flowering. Charles established the eagle as its state symbol. The eagle was the Teutons holy, as a symbol of the omniscient wisdom of their supreme god Odin, and he stood for the power of the Roman Empire, he was popular with the Roman Emperors and the Roman legions carried the eagle as ensigns (Aquila).

These ensigns have consisted in a vertical hold-stick, and on its upper end was fixed a crossbar. On this crossbar sat an eagle. Charlemagne has deliberately adopted the eagle as a symbol of integration for his Holy Roman Empire and thus combines both worlds.

The eagle flag was in the times of the crusades added by a red-white cross banner, a usage which it was at that time usual. With the help of the varicolored crosses, with whose designing or with whose combination with an otherwise colored bunting, the crusading nations or knight orders were differentiatable, and it was unmistakablely to represent the christian consciousness. After the end of the crusades the German cross flag was abolished, but only a little red pennant above the imperial storm flag still remembers it.

The eagle in its two-head version was officially introduced in the year 1433 under Emperor Sigismund, indeed to follow the depiction of the eagle of the Eastroman Empire, its star at that time startet to descend. This version of the coat of arms and the flag maintains until the year 1806, and continued through Austria until the year 1918. The flag with the one-head eagle was continued as the symbol of the Roman king (what means of the Crown Prince or the until one point of time still not to the Emperor crowned King) until the year 1806.

Special and personal flags were the Reichssturmfahne and the Reichsrennfahne: The Reichssturmfahne (imperial storm flag) showed always the image of the imperial standard, but she wore furthermore a red pennant at the top. It was carryed by the so-called Champion (Vorstreiter), the Count of Grueningen. The bearers of the flag were each nominated by the emperor, and enfeoffed with town and castle of Grueningen. The Vorstreit was a kind of preliminary battle, which often decided over the course and outcome of a battle. The Vorstreit unit of the imperial army was led by the bearer of this banner. Since 1336 this dignity belonged permanently to the House of Wuerttemberg. The dignity of the ensign of the Reichssturmfahne was raised in 1803 to the electoral "Erbanneramt", but ended with the Empire in the year 1806. The Reichsrennfahne showed two stripes in black and white, and in the middle of two crossed red swords. It was worn as the personal ensign of the Roman-German Emperor personally from the Imperial Marshal in the battle. In peacetime it was used in a special imperial enfeoffment ceremony, the so-called Berennung. The dignity of the Imperial Marshal was in the hands of the Electors of Saxony since the 14th century, the dignity of the Deputy Imperial Marshal was in the hands of the Counts of Pappenheim. 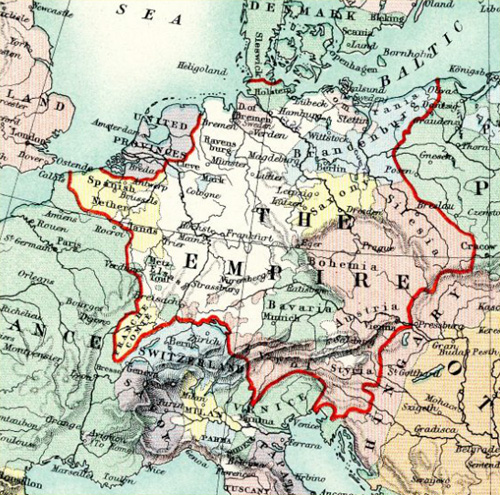 This historical map shows the Holy Roman Empire of German Nation about the year 1650, within a red border.

58 B.C.–455 A.D. · the territories left of Rhine River and south of the Danube River belong to the Roman Empire, to the provinces of Germania Superior, Germania Inferior and Raetia

375 · Hun invasion, the beginning of the Great Transmigration (Hike of Nations), migration of the old Germanic tribes into the Roman Empire, moving up the Franks, Alemanni, Saxons, Bavarians and Thuringians, into central Germany, which is now deserted, migrate Slavs, this area is from now on called Germania Slavica

395 · onset of decline of the Western Roman Empire

480–555 · the Merovingians become the rulers of all the Franks, formation of the Frankish Empire, subjugation of the Alemanni, Thuringians, Bavarians, Burgundians, conquest of Gaul to the Pyrenees and the Alps

751 · transfer of the power from the Merovingians to the Carolingians

768–814 · reign of Charlemagne, subjugation of the Saxons, enlargement of the Frankish Empire to the Iberian Peninsula, Italy and today's Hungary , the sphere of influence extends to the east to the Oder River and the Carpathian Mountains

800 · Charlemagne is crowned as Emperor

900 · in the East Frankish Kingdom forme out five tribal duchies (Saxony, Bavaria, Swabia, Franconia and Lorraine), the beginning of the eastward expansion into Germania Slavica between the rivers Saale/Elbe and the Oder/Neisse, to 1400 annex of Mecklenburg, Brandenburg, Margraviate of Meissen, Silesia and Pomerania, the Teutonic Order conquers on behalf of the kings of Poland (East) Prussia, Pomerelles (West Prussia) and acquires the territories of today's Latvia and Estonia, confrontaions with the westward expansion of Poland

2nd of February 962 · the East Frankish King Otto I. is crowned as Emperor of the Holy Roman Empire (the empire includes the territories of today's Germany, Austria and Switzerland, Eastern France [Lorraine], the Netherlands, Eastern Belgium, Slovenia, Northern Italy and Bohemia) in the following centuries formes out none unified central governmented state (like France), but the reign of the Emperor must always hold back against the interests of the dukes, princes and cities, resulting of heritage divisions arise in the Holy Roman Empire up to 1.600 sovereign authorities and estates

987 · extinction of the Carolingians in the West Frankish Empire

1356 · Decree of the Golden Bull by Emperor Charles IV., the one constitutional document of the Holy Roman Empire of German Nation, setting of an electoral kingship by seven Electors (of Trier, Mainz, Cologne, the Palatinate, Saxony, Brandenburg and Bohemia), if the number of electors changed at times, the bull remained as valid to the end of the empire in 1806

1618–1648 · Thirty Years' War in the German Reich as a confrontation between protestant and catholic contradictions and the influence of foreign powers (Sweden, France, Denmark), death of up to one quarter of the population, weakening of the power of the emperor

1801 · all left-bank territories of the River Rhine ceded to France, and incorporated by this

1804 · the German Emperor Franz II. assumes the title of "Emperor of Austria", and is thus emperor of an empire within his empire

6th of August in 1806 · Emperor Franz II. lays down the crown of the Holy Roman Empire of German Nation, the empire ends, remaining or subsequent structures are the Rhine Confederation, Prussia and Austria