Colors of the country,
ratio = 2:3,
Source, by: Brockhaus Konversationslexikon, 1894

The Duchy of Mecklenburg became for the first time divided in 1352, between two lines of the dynastic family, that happened again and again, so also in 1621 and at least in 1701. The Dukes – from 1814 Grand Dukes – of the two principalities shared not only their title, they also used the same coat of arms, and the same colours and flags. From 1755 there was even a common "Convening of Ranks" (a sort of parliament) for both principalities.

19th cent. to 1918,
Coat of arms of Mecklenburg-Strelitz,
Source, by: HGISG Geoinform

1918–1934,
coat of arms of the Free State of Mecklenburg-Strelitz,
Source, by: Wikimedia.org By Hupp, PNG durch David Liuzzo [Public domain], via Wikimedia Commons

The coat of arms of the Lords of Mecklenburg showed originally a griffin, but from 1219 a black head of a bull on a golden background. From the 14th Century, a quartered shield was used, which showed the possessions and acquisitions of the House of Mecklenburg. These heraldic pictograms appeared over the times again and again or became supplemented. Initially these were the bull head on gold for Mecklenburg, a golden griffin on blue (Rostock), a between blue and white splited field, in the upper blue, a golden griffin, the lower a green field (Principality of Schwerin), an oblique bull's head on gold (Werle), a between red and gold splited field, also used as central shield (County of Schwerin). From the 16th century there appeared an arm, holding a gold ring, on red (Stargard), and from the 17th century even a crowned silvery cross on red (Ratzeburg).

After the monarchy was abolished, Mecklenburg-Strelitz became a free state, and adopted in 1918 a new coat of arms. It was splited and half-divided, it showed to the left in blue a crenellated silvery wall with a pointed roofed crenellated tower (Stargard), upper right on gold a black bull's head with neck fur (Mecklenburg), bottom right on red a silvery cross (Ratzeburg ). Above a "people's crown". When we compare the heraldic pictograms with those from before 1918, it is striking, that crowns are no longer present. In 1934 Mecklenburg-Schwerin and Mecklenburg-Strelitz were merged to the Country of Mecklenburg.

from 1807,
National (Cockade) of Mecklenburg-Strelitz

to 1919,
Cockade of Mecklenburg-Strelitz

In the Napoleonic period, the cockades of the country showed from 1807 in an oval-shaped cockade (a so-called 'national') the color-combination of blue-red-yellow, but in the year 1919 red-yellow-blue on an round cockade. The authors know nothing more about the coloration and design of the blanket between the end of the Napoleonic era and the end of the monarchy in the year 1918. 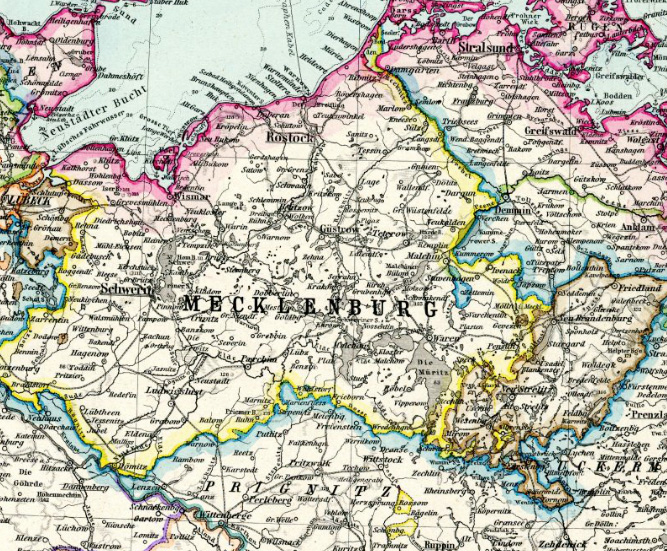 1755 · introduction of a constitution (state's constitutional hereditary comparison) for both parts of the country, which thus form (de jure) a single state until 1918 and with it a common parliament

10th of February in 1808 · Mecklenburg-Strelitz joins the Rhine Confederation, the Duke is charged by Napoléon to a Grand Duke

1814–1815 · Congress of Vienna, reconstruction of Europe after the era of Napoleon, the ownership and the administrative partitions in the former German Empire become restored, but not the sovereignty of the ecclesiastical countries, their possessions become transferred to old or new principalities, the Dukes of Mecklenburg become levied to the rank of a Grand Duke, the 39 remaining German states – in this way Mecklenburg-Schwerin and Mecklenburg-Strelitz too – become organized in a loose association, the German Confederation

The name Mecklenburg was first mentioned in a document from the year 995 as 'Mikelenburg'. With this name was meant a Slavic castle with the name 'Wiligrad'. Its name was translated into Low German language. Because 'Wiligrad' means in the language of the Obodrites and in Low German language "big castle" ("miekel" = big). The Lords of the Mikelenburg had been princes out of the tribe of the Obodrites and later they became the chiefs of the whole country and even imperial princes. The ruled until 1918. The epithet 'Strelitz' refers to the residence of the country ruling line, the town Neustrelitz.