Flag for the region of Mecklenburg within the country,
ratio = 3:5,
Source, by: Wikipedia (D)

Flag for the Pomeranian regions of the country,
ratio = 3:5,
Source, by: Wikipedia (D)

With the design of this flag, it is also possible to combine the old blue-white-red flag of Mecklenburg with the country's colours blue, yellow and red. The traditional symbol of Mecklenburg is the bull's head, which is added in the today's official flag and in the today's coat of arms by the Pomeranian griffin.

The lesser coat of arms shows a clefted shield, in front golden with a black bull's head, behind silvery with a red griffin, and it combines in thia way the heraldry of Mecklenburg (bull's head) with the Pomeranian heraldry (griffin), as well as the country's name connects both geographical terms. The greater coat of arms shows a quartered shield, the first and fourth field with heraldry of Mecklenburg, in the second of the Pomeranian heraldry, and the third the heraldry of Brandenburg (red eagle on silver). The coat of arms displays in this way, from which territories of which historic lands, the Federal State of Mecklenburg-Western Pomerania is composed today. 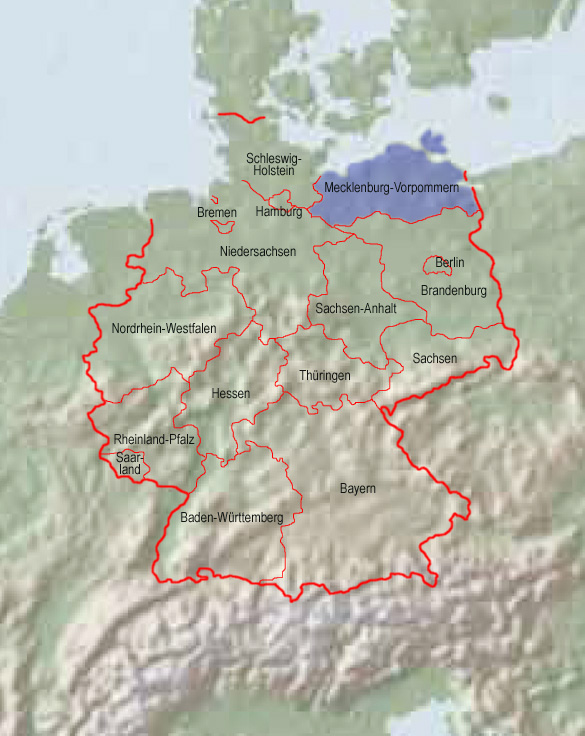 9th of July in 1945 · initially occupation by US-american, British and soviet troops, thereafter withdrawal of the British and US-Americans, affiliation of Vorpommern and smaller areas of Brandenburg und Hannover to Mecklenburg, the country comes as "Mecklenburg- Vorpommern" to the soviet occupation zone

3rd of October in 1990 · re-foundation as "Mecklenburg-Western Pomerania", a federal country of the FRG

The name of Mecklenburg-Western Pomerania is an indication, that the country is essentially composed of two country-parts 1st) Mecklenburg, 2nd) Western Pomerania. The name Mecklenburg was first mentioned in a document from the year 995 as 'Mikelenburg'. With this name was meant a Slavic castle with the name 'Wiligrad'. Its name was translated into Low German language. Because 'Wiligrad' means in the language of the Obodrites and in Low German language "big castle" ("miekel" = big). The Lords of the Mikelenburg had been princes out of the tribe of the Obodrites and later they became the chiefs of the whole country and even imperial princes. The ruled until 1918. The Province of Pomerania extends along the Baltic Coast, from Darss to Danzig Bay. The Oder River and the Oderhaff (Oder Bay) divide the country into a western part and an eastern part. Mecklenburg was merged in 1945 with Western Pomerania to the federal country of Mecklenburg-Western Pomerania. The name of the Province of Pomerania has its roots in the name of the Clavic tribe of the Pomorans, which settled here in 13th century. The Slavic word "po-morju" means "by the sea", and illustrates the location of the country.