Flag of the Archbishopric of Mainz,
Source, by: World Statesmen, Wikipedia (D)

Originally the coat of arms showed the patron of the city, the St. Martin. About 1300 the saint was supplemented by a wheel and a little later they only used the wheel in silver on a red background. The wheel should go back to Archbishop Willegis, who wanted in this way to express his pride for his simple descent. His father was a wheelwright. The flag of the archbishopric was a scutcheo flag, a plain red flag with a silver wheel in the middle. When the city and the archdiocese separated administratively, the city of Mainz took over two wheels – connected with a small cross – in its own coat of arms. In the time of the Napoleonic French occupation (1797–1813) the wheel was initially banned, but later admited, even by color inversion and supplemented by three golden bees (symbol of the House of Bonaparte).

Coat of Arms of the Archbishopric of Mainz,
Source, by: Wikipedia (D) 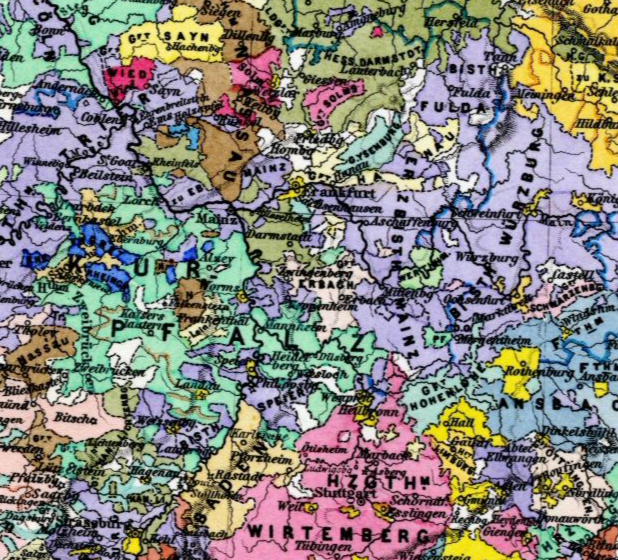 Ancient · settlement by Celtic tribes, and later by Germans from the tribe of the Treverians

58–51 B.C. · the region becomes conquered by Roman troops and comes to the province of Germania Superior (Roman Empire)

12 B.C. · foundation of the legion camp "Mogontiacum" by Drusus

89 A.D. · Mogontiacum is the capital of the province Germania Superior

346 · Mogontiacum is seat of a bishop

408 · Mogontiacum is conquered by the Vandals, Alans and Swabians and looted, the Roman history ends

782 · Mainz becomes levied to an Archbishopric (also called the archdiocese, seat of an archbishop, the first diocese in the province of a Catholic church, where the archbishop resides)

from 11th century · aevelopment of a for independence striving civil community

1244 · Mainz becomes a "free city", i.e. the rule of the princes is terminated and the city is subordinated only and directly to the German king

1462 · End of the "free city", Mainz becomes the electoral residence

1793 · founding of the Republic of Mainz under French sovereignty

1803 · the German Mediatisation (Reichsdeputationshauptschluss) ends the Electorate of Mainz, but the elector remains Archchancellor and went to Regensburg

1806 · end of the Holy Roman Empire of German Nation under the pressure of Napoléon, the emperor resigns, the elector exempts hisself from his imperial duties and becomes prince-primate of the Rhine Confederation, irrevocable end of the Electorate of Mainz, the region is annexed by France, "Mayence" becomes the capital of a French department

1815 · Congress of Vienna, reorganization of Europe after the Napoleonic era, Mainz comes to the Grand Duchy of Hesse(-Darmstadt)

1821 · re-erection of the diocese of Mainz, but without territorial sovereignty

1866 · Fratricidal War of Prussia against Austria, Hesse-Darmstadt and Hesse-Kassel are on the side of Austria and defeat, Hesse-Darmstadt has to cede the cities of Mainz and Worms to Prussia

30th of August in 1947 · foundation of the Country of Rhineland-Palatinate by decision of the Allies, from territories of the south of the Prussian Rhine Province, to date Bavarian Palatinate, and western of the River Rhine placed regions of Hesse (Rheinhessen)

1950 · Mainz becomes the capital of Rhineland-Palatinate

The name of the city of Mainz has its roots in the name of the Roman legion camp "Mogontiacum", what can be translated as "Land of Mogon". Mogon was a Celtic god. Over time the name was shortened and became more and more modified: Moguntia, Mogancia, Magancia, Moguntie, Magonta, Magontie, Meginze, Menze, Meynce, Meintz, Maintz. In the time of the Napoleonic French occupation (1797–1813) the city was officially renamed in Mayence.