The flag of the prince-bishopric shows three horizontal stripes in gold, red and blue and in the middle of the red stripe a white disc with the coat of arms in the middle. It was also used at sea. The flag of the Diocese of Münster is a scutcheon-flag. It shows the colors of the blazon of the Diocese of Münster, a golden shield with a red bar in the middle. It is until today in use and it is still hoisted at important estates of the diocese.

Coat of arms of the prince-bishopric of Muenster,
Source, by: Wikipedia (D), World Statesmen 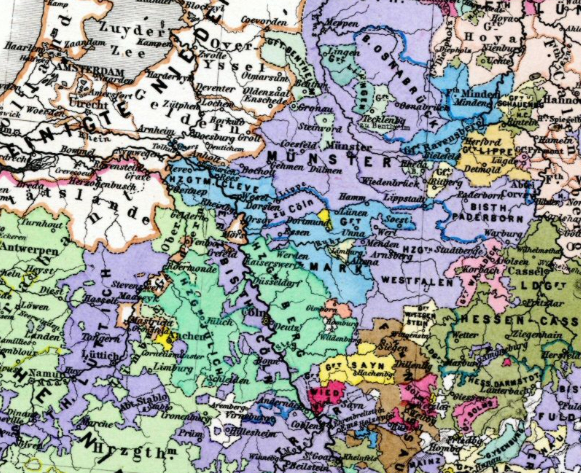 12 B.C. · the region was conquered by Roman forces under Drusus

9 A.D. · Germanic revolt, the Romans withdraw behind the Rhine River

793 · foundation of a monastery by the Frisian missionary Liudger

9th–11th century · Münster belongs to the Duchy of Saxony

12th–13th century · the Diocese of Muenster, is becoming a clerical principality with own sovereign rights (Bishopric)

1648 · Westphalian Peace of Muenster and Osnabrück, the end of the Thirty Years War

1803–1806 · as Hereditary-Principality of Muenster under sovereignty of Prussia

1806 · troops of Napoléon occupy Muenster, the country is partly connected directly to France and partly to the Grand Duchy of Berg

1813 · Prussian and Russian troops free the city from the French

1815 · Congress of Vienna, the region comes to the Kingdom of Prussia and becomes connected to the province of Westphalia, capital of the province is Muenster

The original name of the settlement was Mimigernaford, when the Frisian missionary Liudger founded in 793 a monastery there. The Latin word for monastery (monasterium), was finally formative for "Muenster" (Muenster), the modern name of the town and diocese.