18th century to 1806,
Flag of the Duchy of Nassau-Usingen
Source, by: Snamjena Germanii

18th century to 1806,
Flag of the Duchy of Nassau-Weilburg
Source, by: Snamjena Germanii

The flag of Nassau was created in 1815 by combining the liveries-colours of the three Nassau lines Nassau-Usingen, Nassau-Weilburg and Nassau-Orange, said silver and gold have been let paths. The coat of arms was common for all lines.

The coat of arms of the dynasty Nassau, which arised in the 12th century, showed red armed golden lion with a crown on a blue shield with golden tiles.

The cockades of the three Nassau duchies up to 1806 were monochrome black. Presumably – as in other German states – coloured cockades were introduced during or after the Napoléonic era, which were designed as a golden-blue national (oval cockade) for the only one Duchy of Nassau, which existed from 1815. 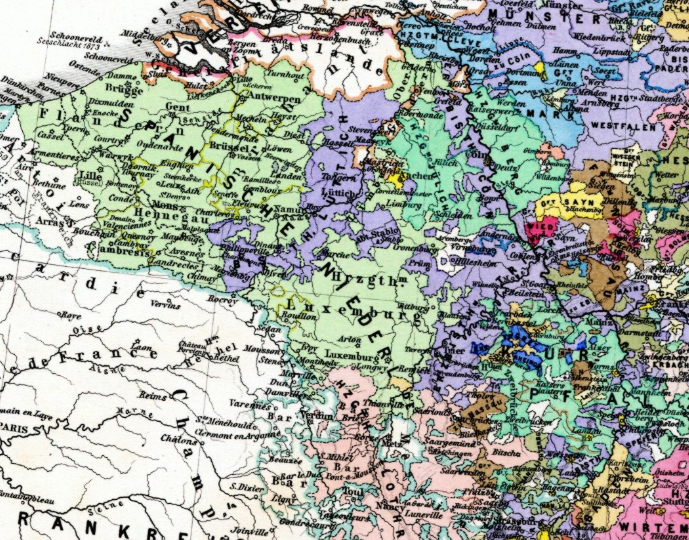 The map shows the territory of the duchies of Nassau in the 17th and 18th centuries in brown color.

1120 · first mention of the Counts of Nassau

1816 · the residence is moved from Weilburg to Wiesbaden

1866 · defeat of Nassau and its allies under the leadership of the House of Habsburg in the fratricidal war against Prussia, overthrow of the rule of the Nassau dynasty, Nassau becomes also merged with the dissoluted Electorate of Hesse-Kassel and the former Free City of Frankfurt to the Prussian province of Hesse-Nassau on 7th of December in 1868