• Map of the Federal States of Malysia

1855–1868,
Standard of the Temenggong (Governor) of Lingga in Johore,
Source, by: Die Welt im bunten Flaggenbild

Johore was a part of the Sultanate of Lingga so that here was initially in use the black flag of Lingga. The Temenggong of the Sultan of Lingga, who was chosen in 1855, even opened the country in the same year. In the year 1858 he changed the flag. It maintained in black, but showed a red upper staff quadrant with a white diagonal cross. In 1868 the Temenggong levied hisself to Maharajah. In this way was detached the anyhow casual allegiance to Lingga, which became meanwhile a Dutch possession. In 1871 were introduced new flags which all show the Islamic symbolism of crescent and star. The design of the flags was orientated in the British ensign-system. United Kingdom introduced a flag system in 1864 in which:
• war ships fly the "White Ensign" (naval flag), a white flag often with an uninterrupted red St. George's-Cross and with the Union Jack in the upper staff quadrant of the flag,
• merchant ships fly a "Red Ensign" (also named "Civil Ensign" → civil flag, the real merchant flag), a red flag with the Union Jack in the upper staff quadrant of the flag, and
• governmental ships fly the "Blue Ensign" (flag for the use by the gouvernment → the actual state flag), a blue flag with the Union Jack in the upper staff quadrant of the flag.
On 1st of April in 1946 the country became a member in the Malay Union. The Malay Union was reorganized in 1948 and converted to the Malay Federation under a British High Commissioner, which reached the independence from United Kingdom in 1957 as the Kingdom of the Malay Federation. In 1963 was the founding of the Kingdom of Malaysia. The from 1948 common politics in foreign affairs and economy made the naval and even the merchant flags of the membering states unnecessary. The hitherto official flag became in this way the new national flag. 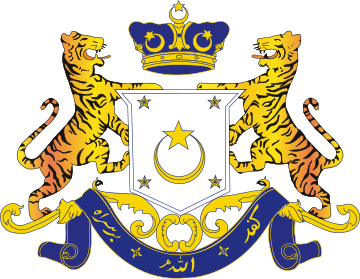 Coat of arms of Johor,
Source, by: By The State Government of Johor (Reviewed from www.johor.gov.my) [Public domain], via Wikimedia Commons

The coat of arms of Johor follows in its design western specifications and shows shield, crown, supporters and a banner. The crown represents the monarchy of the country. The blazon is white and shows in the middle half moon and star (the symbolism of Islam) in gold and four smaller five-pointed stars in each corner of the shield. They represent the four original territories, the today's Johor consits of: make up the fashion Johor today: Johor Bahru, Muar, Batu Pahat and Endau. Supporters are two tigers named Dengkis and Tepuk. They are the mystical guardians of Johor in folklore. The area under the shield shows in gold several stylized plants (gambir and black pepper), on which a blue banner hangs. The banner with Arabic Jawi characters shows the state motto: Kepada Allah Berserah (Submit to Allah).

Map of the Federal States of Malysia

7th–12th cent. · to the Shrividjaja Empire

1511 · Conquest of the Sultanate of Malacca by the Portuguese

1528 · foundation of the Sultanate of Johor

1824 · the Sultan of Johor also becomes Sultan of Lingga

1855 · the Temenggong of the Sultan of Lingga opens Johre

1868 · the Temenggong of Johore levies hisself to Maharajah, separation from Linnga

1886 · the Maharajah of Johore is proclaimed Sultan

16th of September 1963 · proclamation of the Kingdom of Malaysia