The flag of Laos shows three horizontal stripes in red, blue and red, in ratio 1:2:1. In the middle of the blue stripe is situated a white disk. It was in use in the civil wars by the Patriotic Front (Pathet Lao) the armed sprig of the LPF-Party, and on the 2nd of December in 1975 officially introduced as national flag of Laos. Red stands for the in the struggle for the independence given blood, blue stands for welfare and bloom of the country, and white for the promise of a new and shiny future.

The flag of the French Protectorate of Laos was red with the French tricolour in the upper staff quadrant and with a threefold elephant on a pedestal, above that a sunshade and a star. It goes directly back to the flag of the Kingdom of Luang Prabang. The elephant's symbol in the middle of the flag symbolized the ancient name of the country: "Muong Lan Xan Hom Kaho" → "Country of the Millions of Elephants and the white Sunshade".

The Kingdom of Laos took over this flag on the 11th of May in 1974, but without the tricolour. As well the elephant's symbol was changed a little bit. This flag is still in use, namely from the opponents of the rule of the LPRP-Party.

The coat of arms of the Kingdom of Laos was round and showed only the colours gold and silver. In the middle three elephants on stairs, above that a crown. To the left and on the right a sunshade. The coat of arms symbolized the ancient name of the country: "Muong Lan Xan Hom Kaho" => "Country of the Millions of Elephants and the white Sunshade". The coat of arms goes directly back to the Kingdom of Luang Prabang, whose king became king of the state of Laos in 1949.

The three elephants represent now the three kingdoms from which the land emerged: Luang Prabang, Vientiane and Champasak. The parasol stood for the monarchy and the steps of the stairs for the four most important Buddhist commandments: not to kill, not to steal, not do commit adultery and not to eat any intoxicants.

The coat of arms of the socialistic Laos (introduced on 2nd of December in 1975) showed between the years 1975 and 1991 a landscape with rice fields, a road, a building site, a forest as well as a waterpower dam. Above that hammer and sickle as soon as a sharpend red five-pointed star. All this was surrounded by a garland from rice ears, a red banner with the name of the country as well as a sprocket and the rising sun. The whole coat of arms was to interpret as expression of the socialistic developmental program of the country.

In context with the acceptance of a new constitution was the coat of arms changed a little bit in the year 1991. Hammer, sickle and red star became deleted. On its place appears now the pagoda of That Luang. It should symbolize tolerance of the state towards the buddhistic religion and the unity of the nation. That coat of arms shows very well that the communist LPRP-Party indeed had to make concessions, but is still on the power. 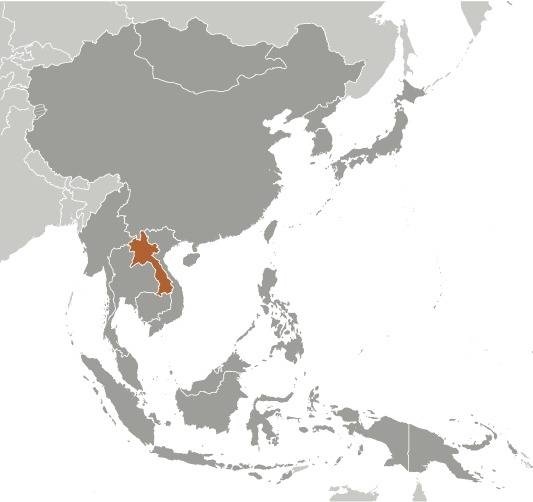 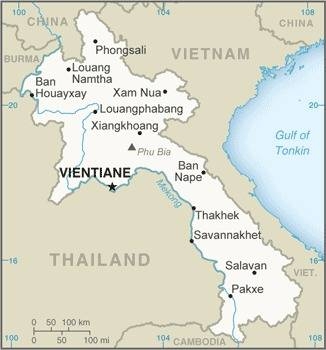 13th cent. · the Thai nation of the Lao immigrates

1707 · Lan Tshang disintegrates into the Kingdoms of Champasak, Luang Prabang and Vientiane

1893 · France purchases from Siam (Thailand) all territories eastern the Mekong River as well as Champasak and Luang Prabang, establishes the French protectorate and summarizes all the territories under the denomination Laos

12th of October 1945 · proclamation of the independence by national forces

March 1946 · intervention of French troops, establishment of the French protectorate including the territories western the Mekong River

19th of July 1949 · Laos becomes independent as a kingdom in the framework of the French Community, what means granting of internal autonomy

21st of July 1954 · Genf Indochina Conference, Laos becomes independent, all foreign troops have to leave the country, the communist guerilla continues the struggle

22nd of March 1955 · foundation of the communist LPF-Party

2nd of December 1975 · abolition of the monarchy, proclamation of the Democratic People's Republic, foundation of the state's party LPRP out of the LPF-Party

The name "Laos" goes back to the Thai nation of the "Lao", which settles in this country in the 13th century.

The Kingdom of Champasak existed as an independent state between 1713 and 1778. After the conquest by Siam (1778), it belonged as a viceroyalty to Siam, but was little more than a province. Siam ceded the country to France in 1893. The monarchy did not end until 1946 by renunciation of the throne.

The Kingdom of Luang Prabang existed as an independent state between 1707 and 1779. After the conquest by Siam (1779), it belonged as a viceroyalty to Siam. Luang Prabang submits itself to under the protection of France in 1877. Siam ceded the country to France in 1893. The monarchy did not end until 1949, by renunciation of the throne, but the last king, Sisavang Vong, became king of the newly created kingdom of Laos in 1959.

The Kingdom of Vientiane existed as an independent state between 1707 and 1828. After the conquest by Siam (1828), the kingdom was abolished. Siam ceded the area to France in 1893.