• Maps about the History of the Balticum

The flag of Latvia shows a slender white stripe in the middle of a carmine bunting. In this way arise three horizontal stripes in ratio 2:1:2. The red stands for the blood which was given for the achieve of the independence in the past. The white stands for the law, the justice, the truth and the honor of the nation.

A red flag with a white stripe has a long tradition in Latvia. Such a flag was mentioned for the first time already in the 13th century. The Rhymed Chronicle of Livonia from the 14th century reports about a battle in the year 1279, in which Latvian tribes from Wenden (Cesis) beared such a flag. A legend tells about to a mortally wounded Latvian chief who was laid on a white sheet. There where he was lying the sheet remained white, but to the left and to the right the sheat was stained with his blood. From the next battle on, which was victorious like all the following, this sheet was used as a flag, and got accepted by all Latvian tribes as flag.

As flag of the people it arises in the course of the centuries again and again, finally in 1915 during the First World War. In context with the signs of the coming independence of the country this flag should be the national flag, but there were qualms that this flag could be confounded with the flag of Austria. Because of that the Latvian artist Ansis Cirulis proposed in May of the year 1917 to use crimson instead of normal red. This flag was officially adoped on 18th of November in 1918 for Latvia. Resolutions of the Parliament confirmed that on 15th of June in 1921 and apparently again on 20th of January in 1923. This flag became re-introduced on 7th of October in 1988 as national flag and on 20th of February in 1990 also as state flag. The deep red colour should ostensibly go back to characteristic, locally typical dye-substances.

Between 1940 and 1941, as well as 1944 and 1953 used Latvia as Latvian Socialistic Soviet Republic and a part of the Soviet Union a soviet unity-model. On 17th of January in 1953 was adoped a new Soviet flag for Latvia. It was a design by the painter Arturs Lapinsch. Of course that flag showed again star, hammer and sickle in gold on red ground, but there was on the lower end of the flag a dark blue stripe, separated from the red field by a wave line. Since the 7th of October in 1988 it was still valid as state flag, and was abolished ultimately on 20th of February in 1990.

coat of arms of Kurland

coat of arms of Livonia

coat of arms of Latgale

The Latvian coat of arms was created by Rihards Zarins and introduced in the year 1921. It was valid until the takeover by the Bolshevists in the year 1940 and was substituted under their rule by a soviet model. In context with the achieve of the independence from the Soviet Union the coat of arms of the year 1921 was intoduced again on 27th of February in 1990.

It shows a divided and half clefted shield. In the upper half a golden rising sun with seventeen beams on blue ground. This is a symbol for whole Latvia and its seventeen districts. In the field left below a red lion on silver. It stands for the countrysides Kurland and Semigallia. In the field right below a silvery fable beast (griffin) with a sword on red. It stands for the countrysides Livonia and Latgale.

Above the shield are positioned three golden stars. The stars stand for the historical countrysides and landscapes of Latvia: the Duchy of Kurland, Livonia and the countryside of Latgale. Shield holders are the red lion and the silvery griffin from the shield. They stand on oak twigs. Below a banner in the colours of the country.

During the Second World War – in the time of the German occupation between 1941 and 1944 – Latvia had officially no own national emblems. It belonged to the Empire's Commissionership of Ostland, in which have been summarized the countries of the Balticum and parts of the today's northwest of White Russia (Belarus). The Latvian Legion, which voluntary fought on the side of the German Empire against the Soviet Union in the Second World War used as sleeve-insignia a red shield with a slender white diagonal stripe. 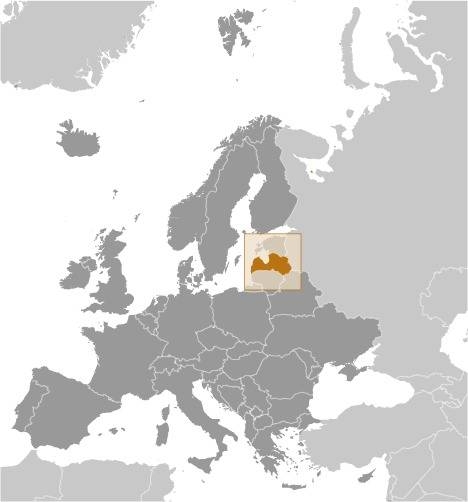 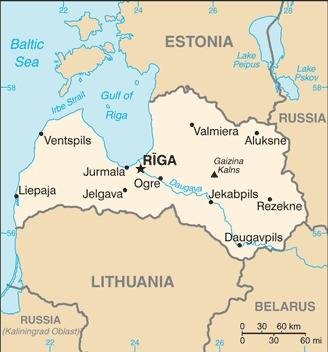 1202 · establishment of the "Order of the Sword Brothers" in Duenamuende

1230 · conquest of Kurland, Livonia, Latgale and Semigallia by the Order of the Sword Brothers

1558–1595 · Livonian War, the Livonian Master of the Teutonic Order transforms Kurland and Semigallia in a duchy as a Polish enfeoffment, Estland was to cede to Sweden and partially to Denmark, Livonia and Latgale came directly to Poland

1721 · Peace of Nystad, Livonia and Estland come to Russia, Kurland, Semigallia and Latgale remain at Poland

1795 · division of Poland → Kurland, Semigallia and Latgale come to Russia

7th of November 1917 · bolshevistic revolution in Russia, seizure of power by the Soviets

3rd of March 1918 · Soviet Russia capitulates towards the German Empire, Peace Treaty of Brest-Litovsk, development of an Latvian state (including Kurland, Semigallia, Latgale and the south of Livonia)

18th of November 1918 · Latvia declares its independence from Soviet Russia, proclamation of the Republic of Latvia

18th of March 1921 · Peace of Riga, Soviet Russia recognizes the independence of Latvia

23rd of August 1939 · German-Soviet non aggression pact, Latvia becomes a soviet sphere of interest and gets occupied by the Soviet Union

5th of August 1940 · inclusion of the LSSR into the Soviet Union, deportation of thousands of inhabitants to Sibiria

1939–1945 · Second World War: June/July 1941 conquest of Latvia by German troops, Latvia comes to the empire`s commissionership of Ostland, 36.000 Latvians fight voluntary in a Latvian Legion on the side of the German Empire against the Soviet Union, December 1944 conquest of Latvia (except Kurland) by soviet troops, 9th of May 1945 the German troops in Kurland surrender, Latvia becomes once more LSSR and incorporated into the Soviet Union again, forcible russification, deportation of thousands of Latvians to Sibiria

29th of July 1989 · declaration of independence

4th of May 1990 · proclamation of the Republic of Latvia

1994 · withdrawal of the Russian troops

2004 · Latvia becomes a member in the European Union

Maps about the History of the Balticum

The designation "Latvia" was usual not until the nascence of the Latvian national movement and the detachment from the Russian control. The country consists of four historical countrysides, which were the home of four historical peoples: Kurland (Latvian: Kurzeme), Semigallia (Latvian: Zemgale) Latgale (Lettgallen) and Livonia (Latvian: Vidzeme). The people of the "Latvians", which names itself "Latvieshi", came into beeing by the fusion of the tribes of the Lettgalles and the Semgalles. The Kures are dissolved into the Latvians, and the Lives are nearly extincted. In this way it came, that the four countrysides were mostly inhabited by Latvians and became united to one Latvia.