National, merchant and naval flag,
ratio = 2:3,
Source, by: Flags of all Nations

Juli bis August 1920,
Flag of the French Mandate Administration,
Source, by: Flags of the World

The today's flag was introduced on the 7th of December in 1943 and in 1995 changed a little bit. It shows since then three horizontal stripes in red, white and red with a green cedar (until 1995 it was natural coloured) in the double broad, white, middle-stripe.

The cedar symbolizes sanctity, eternity and peace. The colour red stands for self-sacrifice and magnanimity and white stands for peace.

The cedar is indeed a typical tree of the Mediterranean region, but the cedars of Lebanon apply as holy and have been known already in the times of King Salomo. The image of a cedar was already in use since 1862 in the white flag of the Christian Territorial Governor under the Turks.

During the period when the country belonged to the Ottoman Empire, de jure between 1516 and 1920, its symbolism was officially used. The Christian Maronites had the right of a kind of self-government, which was in the hands of the Chehab Dynasty between 1697 and 1842, which showed a white crescent on a blue background on the flag, even though the members of the Chehab family meanwhile had become Christians.

As French mandate territory of the League of Nations used Lebanon between 1920 and 1943 the French Tricolor with the cedar in the middle of the white field.

Officially Lebanon has none coat of arms. In the case of requirement is in use since the twenties of the 19th century a to the flag similar emblem. That emblem shows a blazon in red, over there a silvery diagonal bar and in its middle an natural coloured cedar. 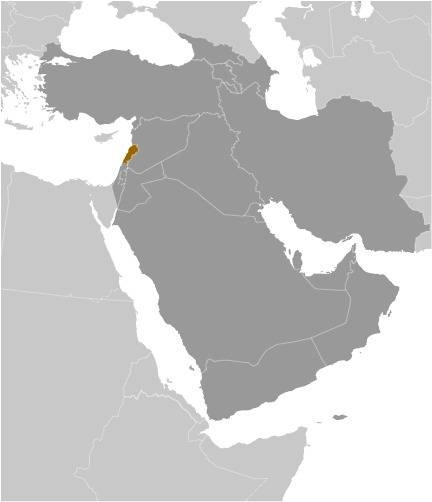 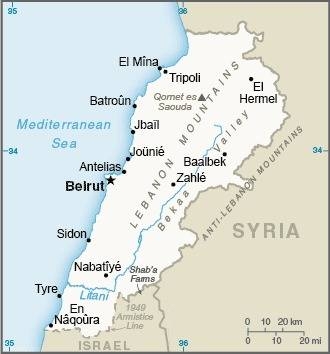 63 B.C. · the today's Lebanon comes to the Roman Empire

643 · the region of the today's Lebanon becomes conquered by the Arabic Califate, partial islamization

1020 · establishment the sect of the Druses

1097 · christian crusaders conquer the region of the today's Lebanon and establish in the north the County of Tripolis, the south comes to the crusader's Kingdom of Yerusalem

1291 · the crusaders get banished out of Beirut and Sidon, end of the christian reign

1799 · France under Napoléon Bonaparte attempts fruitless to conquer Lebanon, advance from south only up to Akkon (Akka)

1840 · civil war between Druses and Lebanese Christians (Maronites), France declares the patronage over the Maronites

1860 · military intervention of France, the Ottoman Empire has to accept from 1862 a christian governor with a indecisive autonomy in Tripolis

1920 · Syria , Palestina, Transjordan and Iraq become separated out of the territory of the Ottoman Empire as prospective mandate's territories of the League of Nations and partly United Kingdom and partly France subordinated → whole Syria (and in this way Lebanon) becomes occupied by France

1926 · France separates Lebanon from Syria, it gets an own government

1939–1945 · Second World War: Lebanon stands initially on the side of the French government in Vichy, 1941 invasion of British and "free" French troops

26th of November 1941 · Lebanon gets formally declared as independent

1943 · Lebanon gets a constitution, the „national pact“

1944 · the mandate of the League of Nations becomes dissolved

1946 · withdrawal of the British and French troops, full sovereignty

1976 · invasion of Syrian troops, occupation of large parts of the country

1978 · Israel invades into the south of the Lebanon

1982 · Israel invades into the Lebanon and advances to Beirut

1985 · withdrawal of the Israeli troops out of Lebanon, except a slender security zone in the south of the country

2000 · withdrawal of Israel out of the south Lebanese security zone

2005 · withdrawal of the Syrian troops from Lebanon

August 2006 · Israeli troops invade in Lebanon, in 34 days of war there was no success to weaken the Hisbolla Militia, the south of Lebanon becomes appreciably destroyed by the campaigns of the Israeli

The name "Lebanon" goes back to the Arabic word for the colour white ("loubnan"). The through the whole country reaching mountains are the "Jabal loubnan", the "White Mountains", the "Lebanon Mountains".