flag of the president,
ratio = 2:3,
Quelle/Source: nach/by: Flags of the World

The today's flag of Liberia was introduced on the 26th of July in 1847. It shows eleven stripes in red and white, and in the blue upper staff corner a white five-pointed star. It is first of all a copying of the flag of the USA and should in this way document the political dependence of the republic from the United States resp. the US-American legacy of the founders of the state.

In the beginning of the colonization of Liberia by released black slaves from the USA was in Liberia in use the flag of the USA, the country was considered a colony of the USA. In the year 1827 the stars were removed from the flag and substituted by a white cross. Probably was the reason for that doing to avoid the ongoing modifications of this flag by new incorporated USA federal states. In the year 1845 there was an incident in the ocean with a British ship which did not know the flag. That is why they decide to proclaim the independence and to adope a flag which is better to differentiate from the flag of the USA. The number of the stripes became reduced to eleven and in the upper staff quadrant was positioned a white star. In this way the flag received its today's appearance. It was inroduced on the 26th of July in 1847 on the independence day.

The white star on the blue ground is the so named "Freedom Star". It should point at the case that Liberia should be "a lucid light in the dark continent", and that to the point in time of the foundation of Liberia this state ostensibly should have been the only independent state of Africa. The eleven stripes stand for the eleven signers of the declaration of independence. There were several attempts to conform the appearance of the flag in "African conditions", hitherto always unsuccessfully.

The flag of the President is a dark blue with the coat of arms in the middle. In every edge of the flag is one white star.

The coat of arms was introduced on 16th of July in 1847. It shows a golden bordered shield with a coastal scenery, a rising sun, a sailing ship, a white pigeon with a message and in the foreground a plow and a shovel near a palm tree. The shield should describe the history of nascence of the republic. The pigeon with the written message symbolizes the message of peace and of good will of the country to the nations of the world. In the white banner above the shield the motto of the country in black characters: "The Love of Liberty brought us here". In the white banner below the shield, likewise in black characters, the name of the country. 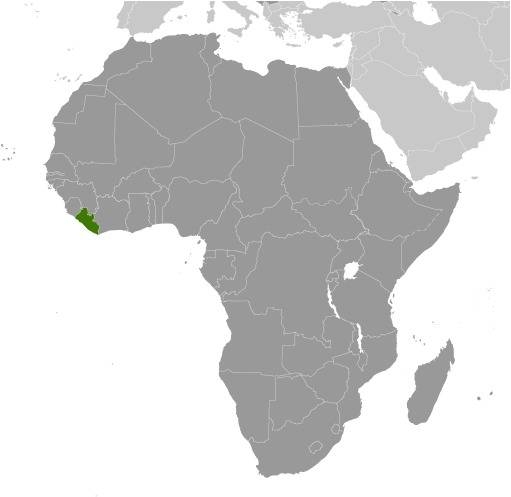 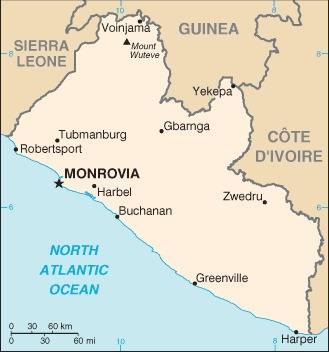 1487 · the Portugese seafarer Bartolomëu Diaz discovers the today's coast of Liberia, that will be later known as Pepper Coast, a European colonization however follows not

1834 · establishment of the Black's Republic of Maryland near Cape Palmas

26th of July 1847 · Liberia becomes an independent republic, but remains for leastways 100 years dependent from the USA and temporary even from Great Britain

1857 · the Black's Republic of Maryland becomes incorporated into Liberia

1862 · formal recognition of the independence of Liberia by the USA

1878 · the True Whig Party, the party of the Americo-Liberian elite comes to the power and remains until 1980 in function

1885 · Liberia fixes its today's borders to its neighbours

1914 · riot of the African inhabitants against the Ameriko-Liberian elite

1930 · riot of the African inhabitants against the Ameriko-Liberian elite

1942 · the USA occupy Liberia in the Second World War and establish a military base, Liberia has to join in the afteryears even actively in the war

1945 · suffrage for men of the African population

1990 · assassination of Doe by Ameriko-Liberian Johnson's militias, a wing of the NPF, enduring civil war

2003 · struggles and riots against Charles Taylor, he leaves the country

The name "Liberia" has its roots in the Latin word "Libertas" or also in the English word "Liberty". "Liberia" means because of that "Country of Freedom". This is a hint for the foundation-myth of this state, the settlement of released black slaves on their native continent Africa.