unofficial national flag with arms,
ratio = 2:3,
Source, by: Flags of the World

flag of the District (Oblast) of Donetsk

The today’s flag of Ukraine was introduced for the first time on 29th of April in 1918, and re-introduced on 21st of January in 1992. It shows two horizontal stripes in blue and yellow. The pale blue stands for the heaven and the golden yellow for the wheat fields of the country. Yellow and blue are the national colours of Ukraine. They have their roots in a very old coat of arms of Galicia, which showed a golden lion on blue ground. A flag with this symbolism was adoped in the year 1848 and became showed on the Slavic congress in Prague.

After the Russian revolution of 1905 arised in the Ukraine blue-yellow and yellow-blue striped flags. After the farmer's revolt of 1917 was officially adoped a yellow-blue striped flag. It showed the stripes in the heraldic correct sequence, yellow over blue. After a coup d’état in the year 1918 the colours became inverted and in this way was adoped the today’s flag.

After the Russian bolschevists conquered the Ukraine in the year 1921, was immediately established an Ukrainian soviet republic, which became founding component of the Soviet Union in 1922. It used the typical red flags with the initials of the soviet republic in the upper staff quadrant, since 1937 completed by hammer, sickle and star. In the year 1949 was adoped a new flag for the Ukrainian Soviet Republic. It showed two horizontal stripes in red and blue in ratio 2:1 and in the upper staff quadrant of the big red field hammer, sickle and star.

After the end of the Soviet Union in 1991 arised the blue-yellow flag again and it became officially re-introduced on 21st of January in 1992.

coat of arms of Ukraine

The small coat of arms of Ukraine shows a blue golden bordered shield with a yellow trident (ukrain.: Trizub). This symbol was already in use on coins of the Rus of Kiev about the year 1000. The trident is disputed, from there was it adoped only for the small coat of arms by decree of the president in the year 1992. A big coat of arms hitherto was not introduced. 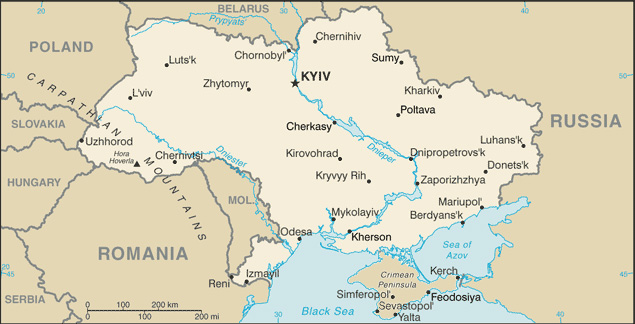 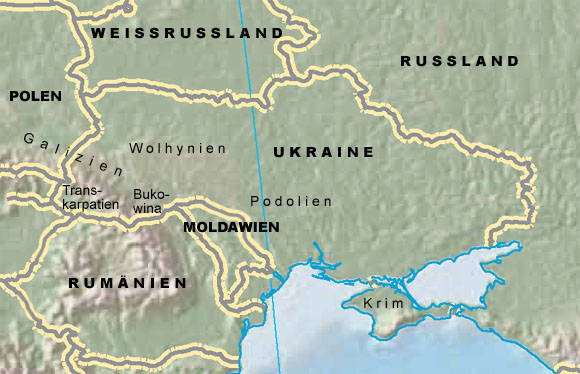 The Ukraine, its Landscapes and Neighbours,
Source: Freeware, University of Texas Libraries, modyfied by: Volker Preuß

since 800 · Swedish Normans, so named Varegers, invade over the rivers Memel (Neman), Western Dvina, Neva and Volchov into the environment of the Eastern Slavs

862 · the Vareger Rjurik conquers the town of Nowgorod, the local Slavonic tribe of the Slovenes levies Rjurik to the "Prince of Novgorod", that establishes in this way the Rus of Novgorod, a Norman feudal state, and the until 1598 ruling Rjurik Dynasty

ca. 882 · the Varegers Askold and Dir conquer Kiev and establish the Rus of Kiev, a further Norman feudal state, the Vareger Oleg, successor of Rjurik, aims for the unification of Novgorod and Kiev

882 · unification of Kiev and Novgorod, establishment of the Empire of Kiev

911 · Oleg advances along Dnjepr River to the Black Sea and beleaguered successfully Constantinople – the capital of the Byzantian Empire, making of a trade treaty with Byzantium

962–973 · reign of Svjatoslav in the Empire of Kiev, campaigns against the Slavonic tribes of the Vjatitshes, Wolynians and Drevljans, as well as against Chasars and Volga Bulgarians

988 · Vladimir the Saint introduces the Christianity

1019–1054 · reign of Yaroslav the Wise, the Empire of Kiev evolves its greatest power and dilation, in the north to the White Sea, in the East to the rivers Northern Dvina, Sukhona, Volga, Oka, Don, in the south to the Black Sea, in the west to the Carpathia Mountains and nearly to the Weichsel River, as well as to the today’s eastern border of the Baltic states

ca. 1050–1150 · the people of Kumans conquers the south of the Empire of Kiev, loss of accession to the Black Sea, decay of trading, beginning disintegration of the empire

1648 · riotings against the Polish rule, establishment of an Ukrainian Cossack state

1772 · First Polish Division, to counteract the growing Russian influence in the Polish state protect Austria and Prussia broad Polish territories against the Russian pounce by its annexation, Prussia annexes West Prussia, Ermland, Pommerellen (without Danzig), the Kulm Country, the northern Kuyavia and the Netze Area, Austria annexes Galicia, the southern parts of the Districts of Krakau and Sandomir, the District of Reussen with Lemberg, Russia annexes all Polish territory eastern the Duena River and the Dnjepr River, in the afteryears the conditions in the country become conspicuously better, but the Confederation of Magnats (nobilitie's assembly) of Targowica in the year 1792 calls for Russian support

1793 · Second Polish Division, to counteract the growing Russian influence in the Polish state again protects Prussia once more broad Polish territories against the Russian pounce by its annexation, Prussia annexes Great Poland (South Prussia) and Danzig, Russia annexes the Ukraine, Eastern Polesia and Eastern Wolynia, as a result of that in 1794 occurs the national people's revolt under Tadeusz Kosciuszko which was especially orientated against the Russians and the pro-Russian aristocracy, once more political, economical and cultural decline

15th of March 1917 · resignation of Tsar Nikolaus II., end of monarchy, formation of a provisional government of the Republic of Russia under Prince Georgij Jevgenyewitsh Lvov, later under Alexander Fyodorowitsh Kerenskij

March 1917 · anarchistic farmer's revolt in Ukraine, it separates from Russia and declares its independence

February to May 1918 · First World War (1914–1918), because the Bolshevists retarded the signing of the Peace of Brest-Litovsk, German and Austria-Hungaryn troops occupied large parts of Belarus, Ukraine and Russia, ca. to the rivers Don, Donez, Sejm, Dnjepr and Velikaya

11th of November 1918 · end of the First World War, the German and Austrian troops withdraw from Ukraine

1921 · war of Soviet Russia against Ukraine, estblishment of the Soviet power, deportations to Sibiria, the Ukraine becomes the Ukrainian Socialistic Soviet Republic

1941–1944 · occupied by German troops in the Second World War, Ukrainian fight in large numbers within the Soviet troops against the Germans, but some Ukrainians (ca. 300.000) hoped for a liberation from Russia and from the bolshevism and fought within the lines of the German War Might, or within special units by the hands of the German Empire

24th of October 1945 · Founding component of the United Nations (UNO)

16th of July 1990 · the Ukraine declares its sovereignty

24th of August 1991 · the Ukraine declares its independence

21st of December 1991 · joining of all former Soviet Republics of the USSR to the CIS (except Georgia), irrevocable end of the Soviet Union

1996 · constitution for Crimea, it becomes an autonomous republic

7th of April in 2014 · proclamation of the (Russian) Republic of Donetsk in Donbass Area, later also of the Republics of Luhansk, Kharkiv and Odessa

February 2022 · Russia invades Ukraine and starts a war, virtually as an escalation of the Russian-Ukrainian conflict in the Donbass region that has been simmering since 2014

The name Ukraine is derived from the Russian expression "u kraijna", what means "at the border". The Ukraine is the "border land".