The colors gold and red are derived from the coat of arms of the country, three golden medlar blooms on red shield. The origin of the color blue is unknown, and even not to explain heraldicly by the intermarriages into the lineage of Arenberg.

The arms of the Duchy of Arenberg-Meppen shows three golden cinquefoiled medlar blooms on a red shield. The coat of arms was already in use when the Duchy still was located in the Eifel Mountains. 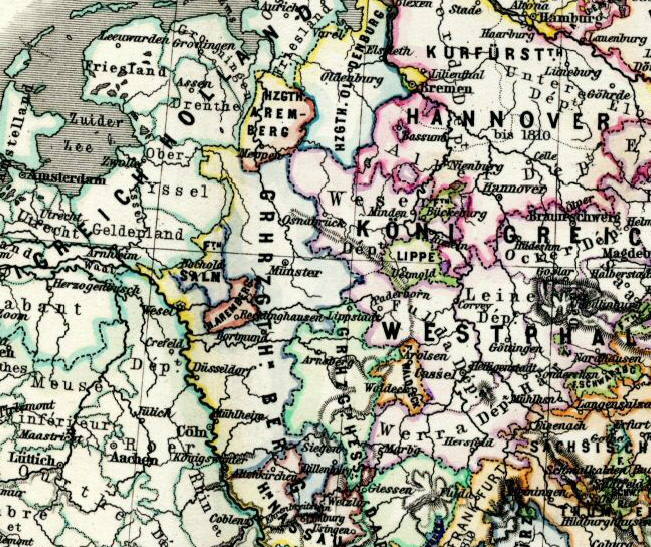 1801 · all left-bank territories of the River Rhine ceded to France, and incorporated by this (in this way the in the Eifel Mountains placed Duchy of Arenberg)

1803 · German Mediatisation (Reichsdeputationshauptschluss), transformation of the territorial partition of the German Empire, ecclesiastical possessions become confiscated, old princely territories and free cities become confiscated or dissolved or annexed to old or new principalities, the number of sovereign authorities and territorial entities of the empire is thus reduced from 300 to 60, the Duke of Arenberg gets compensation for the loss of his country in 1801, the two areas Meppen and Dülmen/Recklinghausen, he appropriates them as Duchy of Arenberg-Meppen already on 26th of November in 1802

12th of July in 1806 · Napoleon forces the creation of the Rhine Confederation, an alliance of sixteen southern and southwestern German states under French protectorate, the Duchy of Arenberg-Meppen is one of the founding members

22nd of January in 1811 · the area of Recklinghausen (south of the southern exclave) becomes annexed by the Grand Duchy of Berg, the Duke will be compensated financially (he is married to the niece of the French Empress), and he receives the title of a French Duke

1815 · Congress of Vienna, reconstruction of Europe after the era of Napoleon, the ownership and the administrative partitions in the former German Empire become restored, but not the sovereignty of the ecclesiastical countries, and even not the sovereignty of the Duchy of Arenberg (Recklinghausen and Duelmen come to Prussia, Meppen comes to Hanover), their possessions become transferred to old or new principalities, the 39 remaining German states become organized in a loose association, the German Confederation

1826 · Hanover rebuilts within its territory, from the territory of Meppen, the Duchy of Arenberg-Meppen , the Duke of Arenberg receives enhanced privileges there

The name "Arenberg" goes back to the noble family of the Counts of Arenberg, which built near Arenberg their ancestral home (their Castle) in the 12th century. Over the years the place became to "Aremberg", but the House of Arenberg retained its name. The counts were levied in 1576 to princes and in 1644 to Dukes. The chief of the house lives today in Belgium.