Flag of the country,
Source by: Wikipedia (D)

Flag of the Prime Minister,
Source by: Wikipedia (D)

The flag of Baden-Wuerttemberg was introduced in 1952 with the creation of this federal country. With the assembly of the colours black and yellow it should be an extract of the colours of the old countries Baden (yellow-red) and Wuerttemberg (black-red). In reality it could be the colors of Swabia, too. The country's official flag exists with a greater and with a lesser shield, and their use is determined precisely, and it is individuals expressly prohibited to use the country's official flag.

greater coat of arms of Baden-Wuerttemberg,
Source: by: Wikipedia (D)

lesser coat of arms of Baden-Wuerttemberg,
Source: by: Wikipedia (D)

The country uses a greater and a lesser coat of arms. The greater coat of arms shows in addition to the escutcheon two supporters on a pedestal, and the crown above the esutcheon shows six small shields, which represent the following countries: Frankonia, Hohenzollern, Baden, Wuerttemberg, the Palatinate and Austria. They are placeholders for territories of the today's country that belonged once to the one or the other listed country. The lesser coat of arms is limited to the shield and a stylized crown. The escutcheon of Baden-Wuerttemberg shows three black lions on gold, the emblem of the ancient Duchy of Swabia. It existed between the years 746 and 1290. It was placed in an area between the Grisons, Alsace, southern Baden, southern Wuerttemberg and the southern Bavarian Swabia to Lech River. The lions are sometimes called Staufer Lions, because the Hohenstaufen as the last Dukes of Swabia used this crest. But the Hohenstaufen Dynasty had their own coat of arms. It showed a black eagle on golden background. 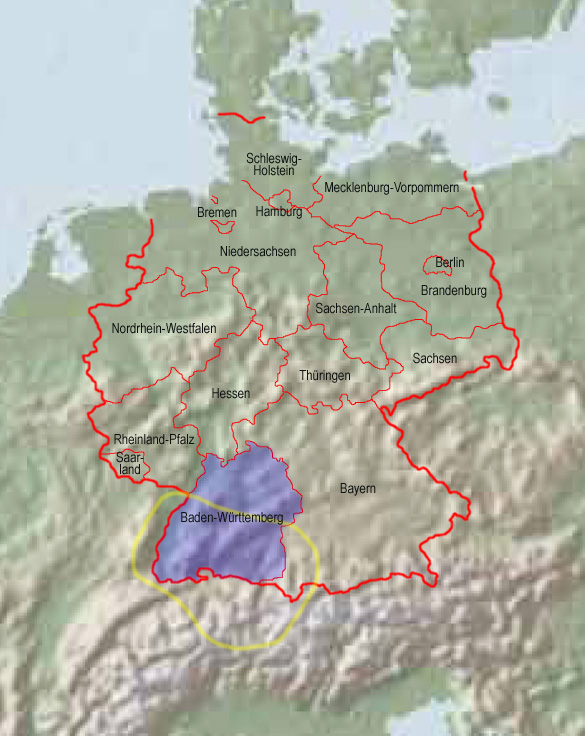 Baden-Wuerttemberg appears on the map in blue, and the yellow border shows the boundaries of the Duchy of Swabia, approximately between 917 and 1268. 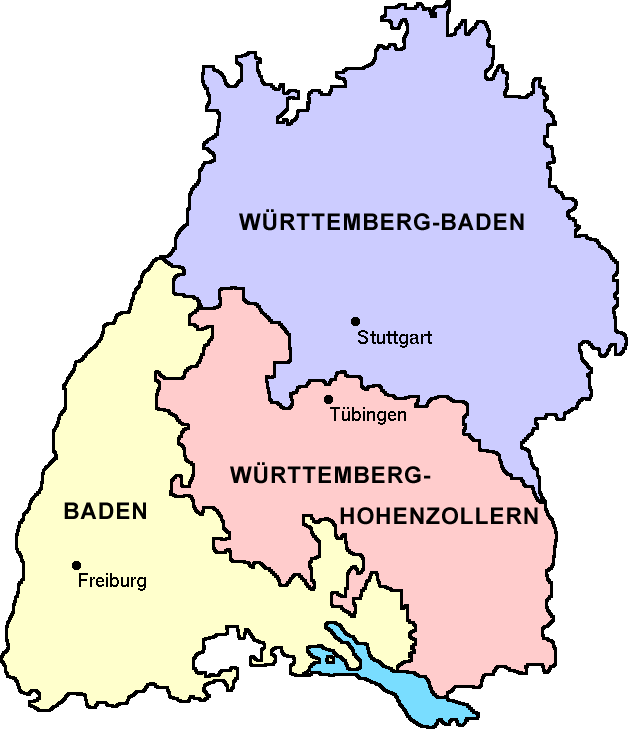 25th of April 1952 · creation of Baden-Wuerttemberg out of the countries Baden, Wuerttemberg-Baden and Wuerttemberg-Hohenzollern, in consequence of a plebiscite.

1970 · referendum in Baden on maintaining the connection with Wuerttemberg

The country "Baden-Wuerttemberg" was formed in 1952 from three countries, which largely coincide with the territories of the former two German states, "Baden" and "Wuerttemberg".

The name "Baden" points out to the town of Baden (Baden-Baden), namesake of the Marquisate of Baden, which appeared in the middle of the 12th century. The word "Baden" ("bath") refers to the existing hot springs there, which were already known by the Romans as a bathing place, which they called "Aquae Aureliae" (Bath of Aurelius).

The name "Wuerttemberg" goes back to the former – until 1918 ruling – dynasty of the Dukes of Wuerttemberg. Their name has its roots in the Castle Wirtemberg (located in Stuttgart-Rotenberg). With the elevation of the Duchy to an Electorate in 1803, the name of the country was officially changed from "Wirtemberg" to "Wuerttemberg". Sometimes is used instead of "Württemberg", the name "Swabia" ("Schwaben"). This points out the the here living German tribe of the "Swabians".