The historical Flanders is today separated in four regions, respectively it exists within other borders:

• State-Flanders, since 1648 part of the Netherlands, the mainland of the Dutch Province of Zeeland
• Belgian Flanders, today separated in the Belgian provinces of East Flanders, West Flanders and parts of Hainaut
• Flanders, since 1980 one of the two components of federal Belgium (Flanders in the north, Wallonia in the south)
• French Flanders, since 1659 to France, today the Départements Nord and Pas-de-Calais, = Region "Nord-Pas-de-Calais", 2.217 sq.mi, Capital: Lille, 227.000 inh.

• Map of the historical Regions in France

• Explanations about the Regions

Flag of Flanders,
Source, by: Flags of the World

Flanders knows today two flags, both of which go back to historical coat of arms of the country:

The in 1960 created region "Nord - Pas - de - Calais", uses an unofficial flag modeled on the coat of arms of New Flanders.

The Heraldry of Flanders knows today two coats of arms, both go back to historical coat of arms of the country:

1.) The arms of Old Flanders how it was known since th 15th century: a shield with yellow and blue gestural changes, with a red heart shield in the middle. The Belgian province of West Flanders still uses a flag with this image.
2.) The coat of arms of New Flanders. Probably during the reign of the Habsburgs the County of Flanders got awarded a different symbol. It showed a black, red armored lion on gold, a heraldry that is still very common and widely known, not least as a symbol of Flanders as a federal unit of the present-day Belgium and as a former province of France. 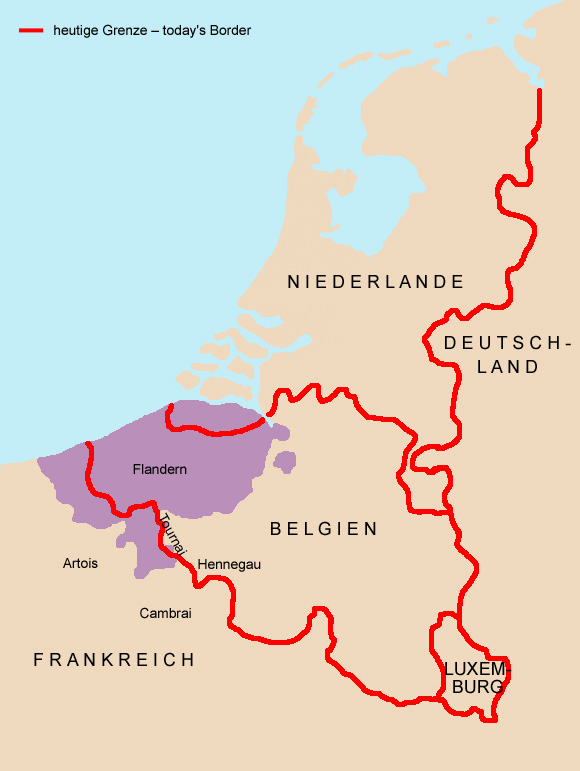 Map of the historical Regions in France

in black: governorate and province in 1776,
in red: former county, province oder governorate

Explanations about the Regions

The until the French Revolution existing provinces (or governorates) have been historically grown structures, which had their roots oftenly in former fiefdoms of the French crown, historic counties and duchies. They oftenly existed for hundreds of years and had preserved regionality (e.g. cultural particularities and regional languages). On the occasion of the French Revolution such phenomena were of course not desirable, and as part of their bloody and violent egalitarianism any regional references were eliminated. Shortly after the French Revolution the provinces were dissolved and France became divided into many départements, which should have approximately the same size and the same status. The départements were named after rivers or mountains, to use never and in no circumstances the name of an old province. However, there was no success in cutting the connections of the people of France to their respective regions, so that administrative regions were re-created in 1960, to have a better control in regional administrative processes. In this way became départements, which were placed in a historical province, administratively grouped to an oftenly historically named region. The resulted structures coincide only approximately with the boundaries of the old provinces. In the strictly centralist France any regionality is avoided, so that even the official flags of these regions mostly look like flags of companies, unloving, unhistorical, technocratic and modernistic, and these flags should not be a subject of any lexical considerations here. Only in a few of that regions, exist official flags which remember the historical models. But, even the existence of these today's regions is douptful, because in 2014 was passed a territorial reform valid from the year 2016, that reduces the number of the existing regions by merging to nearly the half. However, there exist unofficial flags in nearly all of these regions, which should remember the old provinces and the old heraldry.

Area: at the time of its greatest expansion, the County of Flanders covers an area of about 7.700 square miles

Capital: the historical capitals of Flanders are Gent and Bruges, both today are placed in Belgium

8th century · formation of the County of Flanders

1050 · Flanders expands by wars to the east from the Scheldt River to Dender River, in the south acquisition of Cambrai and Tournai

1045 · cede of Valenciennes to the County of Hainaut

1191 · vanish of the Counts of Flanders, Flanders comes as heir to the House of Dampierre of Hainaut

1555 · the House of Habsburg inherits the Burgundian territories

1776 · the already in the 14th century created governorates of the civil administration of the kingdom of France become committed to a number of 39, and correspond in this way to the number of provinces, in previous years could any provinces be summarized in one governorate

1789 · French Revolution, the governorates (provinces) become abolished, the province of French Flanders is converted to the Departement Nord

1815 · Congress of Vienna, Flanders becomes a part of the Kingdom of the United Netherlands

1830 · creation of the State of Belgium, Belgian-Flanders is initially divided in the two départements Escault and Lys, later the two provinces of West Flanders and East Flanders, State Flanders remains in the Netherlands

1960 · reintroduction of regions in France, formation of the Region of Nord-Pas-de-Calais, but not within the historic boundaries, just by integrating the departments of Nord and Pas-de-Calais

The name "Flanders" goes back the old word "Fladmari", what means "shallow marshes" and it stated at the beginning only the area around the city of Bruges.