After the war, the administration within the German Empire was rebuilt, but locally, following the structure of the countries. These have been partly old countries, and some new countries were created. Sometimes they bethought the old country colours and reactivated them – or they created new ones – for limited sovereign duties, which were under the control of the Allies. However, the eastern parts of Prussia were occupied by Soviet troops from 1944, and most of them came under Polish or Russian administration. The process described above did not come into being, the German population was forcibly expelled and the old regional flags no longer played a role.

The coat of arms of Upper Silesia was created in 1926. It shows on a blue shield an half golden Silesian eagle above a golden scythe and crossed golden hammer and mallet. The golden eagle on blue goes back to the coat of arms of the Duchy of Oppeln, that was used until the extinction of the Piast dukes, however, the eagle beared there a crown. The scythe stands for agriculture and tools stand for the mining industry, the main industries in the country. 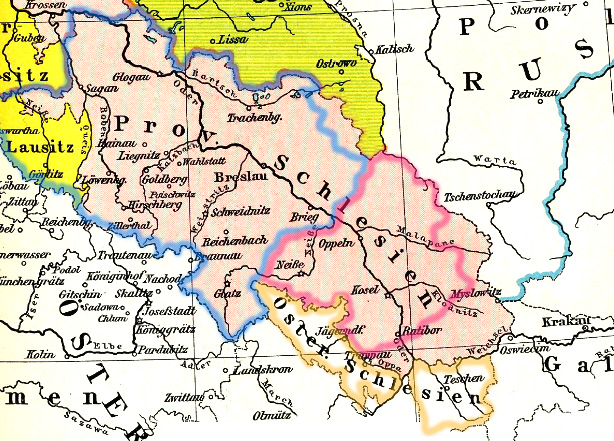 1920 · ceding of the territories of Troppau and West Teshen to the Czechoslovakia, and of East Teshen to Poland

1922 · ceding of East Upper Silesia to Poland, and of the Hultschin Land (Hlučín Region) to Czechoslovakia

1941 · the Governmental Districts Oppeln/Kattowitz resp. Breslau/Liegnitz get declared to the Provinces Upper Silesia and Lower Silesia

1945 · soviet capture and Polish occupation of Upper Sielsia, expulsion of 1 million German inhabitants out of the Polish occupyed territories, annexation of the Olsa Region and the Hultshin Land by the Czechoslovakia